Stuck in Szczecin with far fewer options than we’d expected, it became time to do something extreme. What it was, we weren’t quite sure, as we frantically Googled and asked around for any possible ways out of there. It seemed from what the information booth would tell us, that the only ways out of the airport itself were on a plane further east, on a train further into Poland, or in a cab, so we called one, and bought yet another bottle of cheap whisky at the duty free despite it being only 11am, chugged a few shots each, and hoped for the best.

About an hour later a cab showed up, and the driver knew there would be a train heading in our general direction – one problem, it’s leaving in 25 minutes, and the station is a 40 minute drive away! So the driver takes a swill of vodka, slams on the accelerator, and we’re off! We even offered him an extra zl. 100 if he could make sure we made our train, making him drive even faster, and straight through a speed camera – KURWA MAĆ! – at almost 200 km/h.

We make the train with plenty of time to spare, almost every second of which is spent on trying to get a ticket from a domestic station that clearly doesn’t see many tourists, and babble-fishing our way through the transaction with Google Translate, and more than a few incredulous questions of “train go to where?!” as the ticket office rightly thought the train was an absolutely ridiculous way to get to Stockholm.

We picked up a few źapiekanky for lunch, got on the train, and the journey began, rather too uneventfully, into Germany, a land apparently festooned with Dr. Seuss trees.

Where are all these solar panels in America? 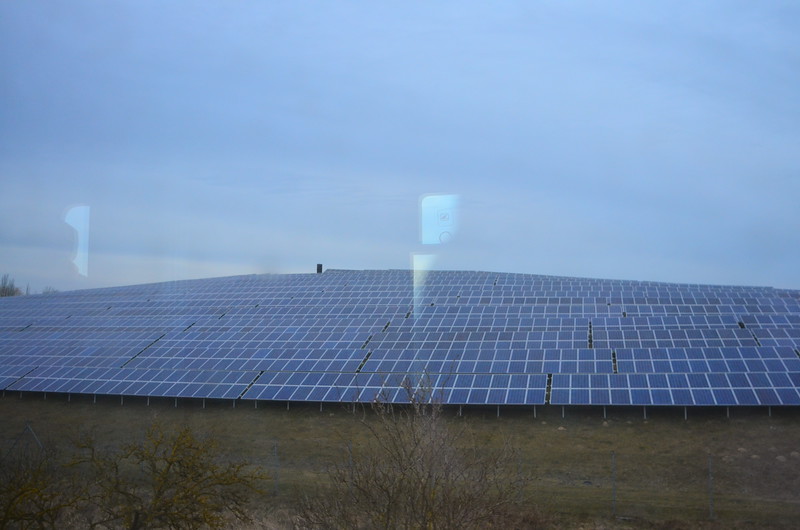 Of course, it doesn’t take long for the trouble to return. We end up on the regional Re-Bahn, a network that could courteously be described as provincial, and worse yet, it’s a Sunday, so half the trains aren’t even running, and those that are, take leisurely routes to every stop in every tiny village.

And that wasn’t all – not having enough wrong already, DB also had major track works going on, and trains only ran one piece of the route at a time, with connecting buses in between where the single track was torn up. So we circled through the state of Mecklenburg-Vorpommern one piece at a time, from Szczecin to Angermünde to Päsewalk to Neubrandenburg to Greifswald to Güstrow to Bützow, and finally to Rostock, where we missed the train to Copenhagen by a full three hours.

The only positive about all this was the view – we truly saw the Germans’ Germany, which actually looked curiously like upstate New York, just with more abandonments. 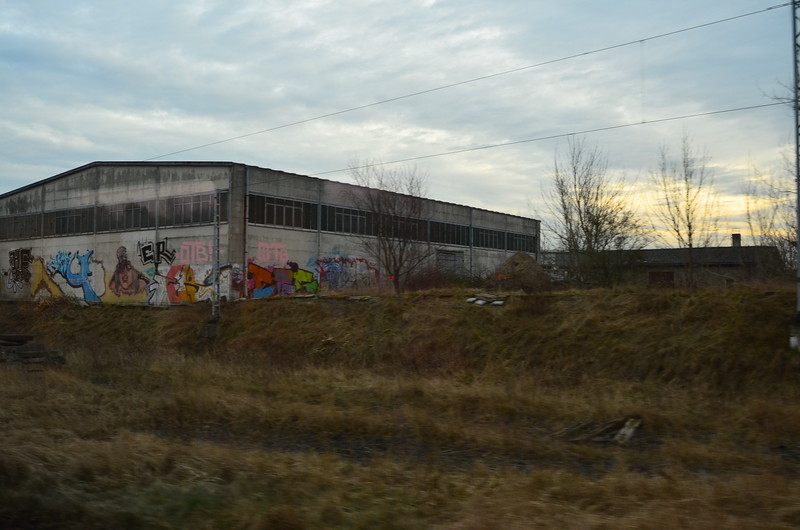 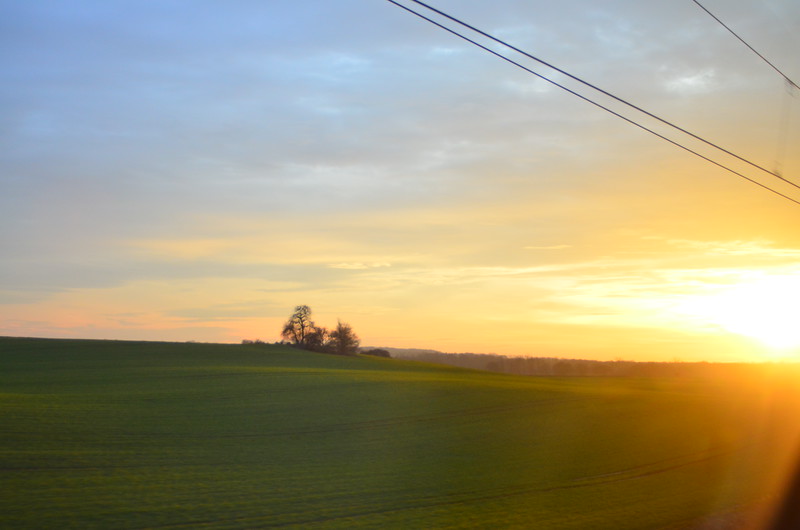 We asked for directions at the station, and the only thing leaving Rostock that night was a Fußballzüg, a special party train bringing hundreds of fans out to an away match, in this particular case FC Hansa 3. supporters on their way to Schwerin. But Schwerin was a slightly bigger city, and quite a bit closer to where we were going (or so we thought – it never occurred to us that there’s a quick and easy ferry crossing from Rostock to Malmö!) so we got on the train, and did our best to get Eurotrashed on the hour long ride, polishing off the bottle of Scotch and picking up a few 1€ beers from the train bar.

From Schwerin, we actually caught the more or less right train to Hamburg, with a chance to make it to Copenhagen… of course, arriving in Hamburg, that one was sold out, and it would cost us 220€ each (first class, since that was the only seat left!) to get to Copenhagen in the morning. So we booked a hostel in Hamburg, and didn’t go much farther than the nearest bar, having no logical options but to drown this night in Erdinger, not even caring enough to check out the Reeperbahn.

In the morning, we got on the packed and expensive train to Copenhagen to do it all over again, on an international express this time. Shortly after Lübeck, they made an announcement in German that I was sure said we had to get off the train and onto the boat. Ben didn’t believe me, but when everyone else did the same, we followed, and realized that we were, in fact, on a train on a boat, about to set sail across the Kattegat. 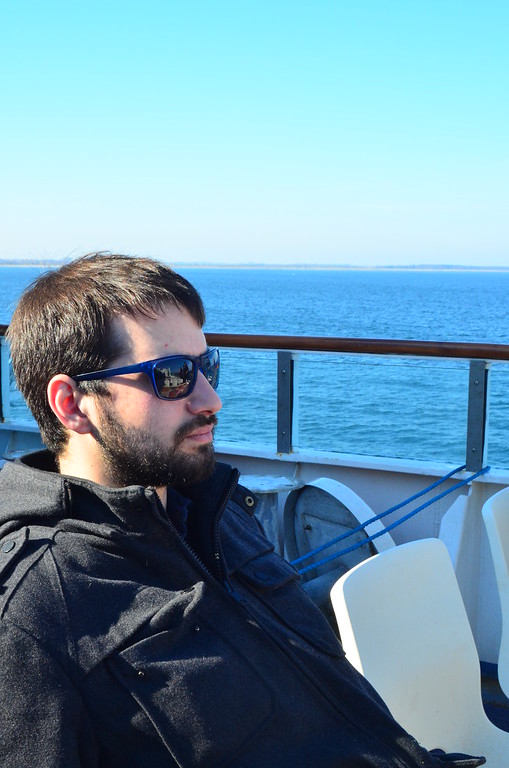 Soon enough, the troat parts ways, and the train goes on to Copenhagen while the boat sits in Odense without us. At least we had a long enough layover in Copenhagen to get some smørrebrød before the train to Stockholm… I’ll never have enough smørrebrød, and unfortunately the ingredients are even too weird to make them at home, let alone start a food truck selling them!

By this point, we’re both pretty much sick of the road and ready to get home, especially with our Team Fail luck, which Stockholm only delivered more of! We checked in at the hostel no problem, but trying to get dinner was nothing short of maddening, with no one accepting our credit cards, and the ATMs (Bankomats) spitting out our cards with some error message in Swedish. We finally convinced someone on the street to take out 500 krone for us for 80€, a terrible exchange for us but we were pretty much screwed otherwise, and hungry enough that we went to the first kebab shop we could find and bought an irresponsible amount of food.

Yesterday morning, we saw as much of Stockholm as we could with a plane to catch and still absolutely jaded… the highlight of it was lunch at a little cafe with Swedish-style smörgåsbord, a (nominal) salad with about eight different kinds of seafood on top, which was delicious!

Even the flight home was surprisingly challenging. Swedish customs gave me trouble about being born in 1955, a clear confusion arising from sharing a name with my dad, and refused to issue my boarding pass until they could contact him and clarify that he wasn’t in Europe and his son was. I have no idea why they needed to do that, because I clearly had a passport, MY passport no less, but they did, and it was a bit of a close call making the flight.

The flight, as most trans-Atlantic flights are, was long and boring, and I spent most of it writing for this blog.

Once we landed in New York and cleared customs, Ben went his own way to meet a friend in Brooklyn, and I went on to the JetBlue terminal for my flight home, and one last EPIC fail…

I got on the plane without incident, seated in seat 22D of a regional jet – window seat, last row before the lavatories – for the flight back to Rochester, just short of an hour of air time.

After takeoff, I noticed that something REEKS; a realization shared by nearby passengers, who complain, at least two of them, to the flight attendants, pointing in my general direction. They assume it’s me; the smell wasn’t exactly that of dirty backpacker, but it could be said there was some resemblance. Rotten cheese mixed with concentrated fart juice, left to marinate in a soaking wet hiking boot, might have been a better description. And I knew my feet did smell from two weeks of walking around rainy Europe, but they couldn’t be that bad…

As we’re crossing Long Island Sound, one of the flight attendants approaches me with a respirator mask and rubber gloves, and tells me that due to my odor, the flight might have to divert to Binghamton (remember, the entire flight should only take 54 minutes anyway) to deplane me, and if that were the case, I would need to find an alternate way home.

I try to explain to them that I barely have a sense of smell (caught a bad cold in Berlin) and still know how bad this is, and I maintain that it is NOT me, and they never would have let me fly Stockholm-JFK in coach smelling like this. She leads me a few rows up, and presumably noticing that the other passengers aren’t wincing in disgust as I walk by, takes off her mask, and agrees that the stench is not mine.

To placate the rest of the passengers, though, the flight attendant orders me locked in the bathroom for the remainder of the flight and tells me not to leave until the plane is on the ground and the jetway doors are open. At this point, I have to wonder if I’ll get a ride home from the airport in a police cruiser – and whether we will in fact be diverted to Binghamton to add insult to insult – but I more or less accept my fate, and ride out the rest of the flight in an airline bathroom. Luckily, it was a cold, clear night with no turbulence to be found… probably the one positive out of this experience.

The flight lasts as long as it should, a reassuring sign that we weren’t diverted.

Eventually, the seatbelt sign goes on, and I try to perch above the toilet just in case the literal shit hits the fan. When the plane lands, the flight attendant lets me out of the bathroom, and starts apologizing profusely.

It was in fact, partially, my backpack that unleashed the epic stink. But only because someone’s forgotten bag of Asian food stuff from weeks ago, including a burst bottle of something resembling fish sauce, and possibly “stinky tofu,” had been stuffed up and behind the last overhead compartment, and its contents had formed a semi-liquefied congealed mess all over the compartment, and apparently no one with a large carryon had sat in 22D for a while.

The flight attendants brought me to the gate, and after some arguing, agreed to give me a $100 voucher for the inconvenience. Not, mind you, for being stuffed into the lavatory for a flight back from NYC. Only for partial compensation for the damage to my backpack and its contents. But anything was welcome at that point…

By this time, I was just about the last passenger left at the airport. As I approached the taxi stand, the dispatcher shut the window in front of me, and said, “sorry, closed for tonight!”. I tried asking the cabs directly, since there were still about 6 lined up at baggage claim, and they responded that they couldn’t pick up airport passengers without a fare card from the dispatcher. The last one in line finally told me the obvious, that I’d stink up the cab.

While I argued, the last bus out of the airport left too, without me on it.

I got to enjoy a rather long, refreshing walk back from the airport last night.

Even if it was a constant cavalcade of fail, it really has been the adventure of a lifetime, and I would do it all again without a doubt! And maybe without all the fail this time, with a better idea how it works. Only this time, there better not be a general strike or fish sauce on the plane!