I woke up with that strange sense of “where the fucking fuck am I?”

There were people in the room speaking French, and I was on the top of a creaky bunk bed. Nothing made much sense to me at first. It took me much longer than it should have to remember that I flew to Europe yesterday, or that I was in a hostel in Copenhagen. Ben was already up and ready to go to a Danish dentist, we missed the first appointment but again what else can we expect, we’re Team Fail.

We only planned for one day in Copenhagen, and it was obvious from the start that we love the place. So our goal was to see as much as we can, and try to experience as much of Denmark as we can before the flight to London.

Just like the Danish parking lot, Danish rush hour comprises a lot of bikes, more than even New York or Portland, and just a few cars. I’d fit in so well here. 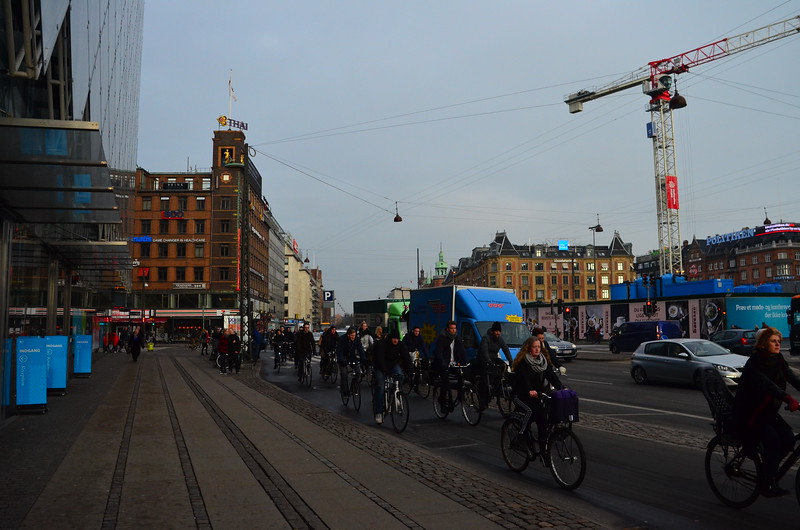 I wish I got a better picture of the clock on the train station… it’s an architectural anomaly, with (by far) the world’s largest Nixie Tube, an array of neon lights displaying the numbers — the first electronic display, before the invention of now-familiar LCD and LEDs. 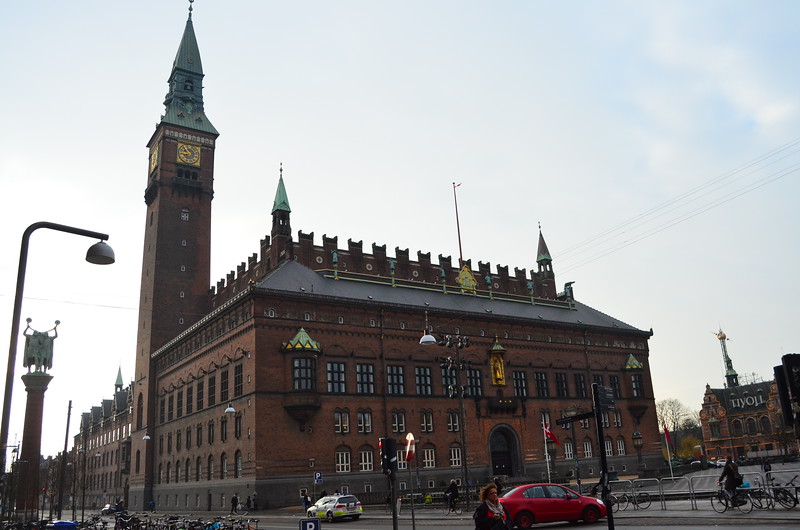 I fell in love with the place. I could easily imagine living here…

I’m not sure what we were thinking when we wandered into a book sale at a monumental old church. Of course neither of us could read any of the books, nor did we really want to carry them all over Europe. I did buy (and eventually break, before I had the chance to listen to it) a record that looked like it might be the Danish folk music we’d heard in Christiania.

These covered streets aren’t unusual in Copenhagen. These are the kinds of architectural choices that would make even Boston or Toronto just that much more inviting.

Another ‘Danish parking lot’… most Danes don’t even lock their bikes. With bikes being as overwhelmingly popular as they are, and Danes having access to a basic income and socialist state, there is little need for petty crime. (In fact, there are substantially more bicycles than Copenhagenites… most people own at least two: a commuter for the weekdays and a faster road bike for weekend rides, and, for suburban Danes who commute by bus or train, a third bike that stays near the office!) 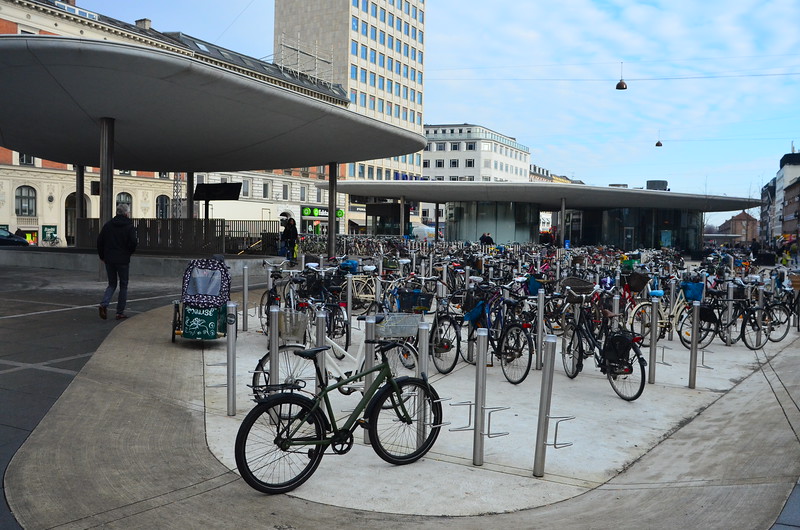 We spent all morning wandering around looking for a good place for breakfast, checking out a few restaurants before finally finding a bakery that appealed to us.

At first we just got a few pastries and orange juice (confusingly called appelsinsaft), but the baker implored us to try more and more, and introduced us to the concept of sørdansk: things that are peculiarly Danish, and suggested a few things that we had to taste later on: smørrebrød, frikkadeller and gammel-Dansk (more about these later!)

Satisfied, and late for the dentist, we continued toward the office, through the Milk Gate, something of a local landmark. The sign, which has been there since World War II, admonishes everyone to drink a half-liter of milk every day for a long, healthy life (½ liter mælk – hvår dag – hele livet), and, on cue, plays a jingle to that effect as well!

While Ben was at the dentist, I took the opportunity to wander around the local neighborhood, Enghaveplads, a traditionally working-class area of Copenhagen. These red-brick buildings, some of them, like this, emblazoned with socialist slogans (here: WORK AND PURPOSE), are the equivalent of “the projects” in the US, or “council housing” in the UK – homes originally provided to the working poor. In Denmark, however, none of the stigma attendent to these places elsewhere, with the effect instead being that Copenhagen remains an affordable place to live, and (although I haven’t seen the inside of one of these places) if this is the equivalent of our inner-city, the housing provided to all Danes is at a much higher standard than many of us in the ‘middle’ class can afford anymore in the US!

Of course, not everything is perfectly clean. Nor should it be. It wouldn’t surprise me if graffiti is tolerated, even accepted here, at the skatepark in Enghaveparken.

The enormous blocks of social housing look out on this square and pond, apparently home to a Hitchcock worth of birds!

Even the ALDI was impressive in its own right. If this store is any indication, Danes are years, even decades, ahead of us in terms of food. Most of the store was filled with organic groceries, fresh meat, dairy, produce, local beer and wine, and prepared foods. Almost every product proclaimed, “økologisk” (similar in meaning to our ‘organic’, but actually enforced), while processed foods were relegated to bottom shelves and an international area with a small American section.

Where our bodegas would push junk food and slushies, Danish corner stores have racks of fresh fruit. An apple or orange, even here in the inner city, is about 40 cents, a cheap snack in a country where the minimum wage is $22.50 per hour.

And some inspiring words for us wanderers… 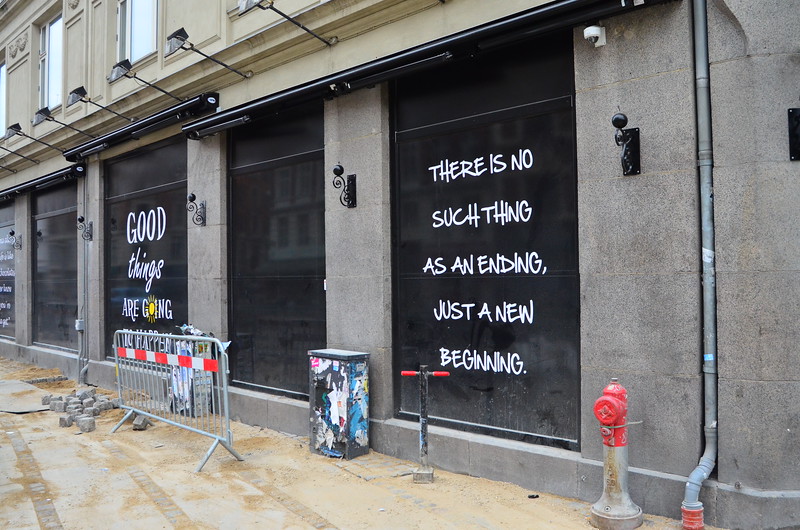 For lunch, we decided on a place we’d seen on the internet, where we could try the Danish national dish, Smørrebrød. Delicious smørrebrød!

Smørrebrød is something of a national obsession in Denmark. While its literal definition (and base ingredient) is buttered bread, there are dozens of traditional varieties, and most Danes will eat it for breakfast and/or lunch on working days (usually made at home and brought to work, but increasingly popular from shops like this). Nowadays, it is often ordered an office at a time, the day before, off of a rather extensive menu and delivered to the workplace at lunchtime. Apparently some places also serve it on a conveyor belt like the kuru-kuru sushi of Japan, but Rita’s had premade smørrebrøden available at a counter instead. We were there rather late for lunch (Danish lunchtime tends to be before noon, as weekday breakfast, when eaten at all, is usually a small snack) and only a few of the flavors were still left. Of course we tried every one. Each of these sandwiches costs DKK 15, or just under $2, and three or four of them make a very satisfying meal.

To an American palate, the ingredients in these things are downright strange. The Danish palate seems to favor combinations that accentuate all six primary tastes: sweet, sour, bitter, salty, spicy and umami. One of the most traditional varieties, dyrlægens natmåd (veterinarian’s midnight snack, or nightmare, depending on the translation) comprises rugbrød, a very heavy, rather bittersweet, beery rye bread, sweet butter, paté, herring in aspic, bacon, and something not entirely unlike pastrami, topped with onions and a slice of beet. (previous photo, top left) They also had frikkadellen, which are basically dry-ish meatballs made of beef, pork and veal, and were a distant second to the smørrebrød.

While that’s just one variety, it’s a good example of what we would encounter in the remaining sandwiches, which contain various challenging combinations of ingredients (corned beef and peaches?!) that all managed to go beyond merely delicious, to the point that we stayed and talked with the chef, and ordered seconds, thirds, et al until we were absolutely stuffed and the shop was out of new flavors to try! Most of the combinations are pretty much evident from the photos, except for the meats, which included breaded codfish, paté, liver, bacon, pot roast, and perhaps venison (or elk or moose?). Even this depleted selection had an incredible variety, and I would say, the most inspiring meal I’ve had in quite some time, if not ever.

Nørrebro amazed us just as much as anywhere else in Copenhagen. A block or two from Rita’s we found this sustainable structure: a grassy hill covering over an abandoned (or perhaps closed for the season) community centre.

Did I mention how much I WANT TO MOVE TO COPENHAGEN?!

This, however, was rather strange… we couldn’t find any interpretation of these that wasn’t wrong on at least some level.

And another inspiring message: “Freedom is a road seldom traveled by the multitudes.” If Copenhagen isn’t freedom, I’m not quite sure what is. 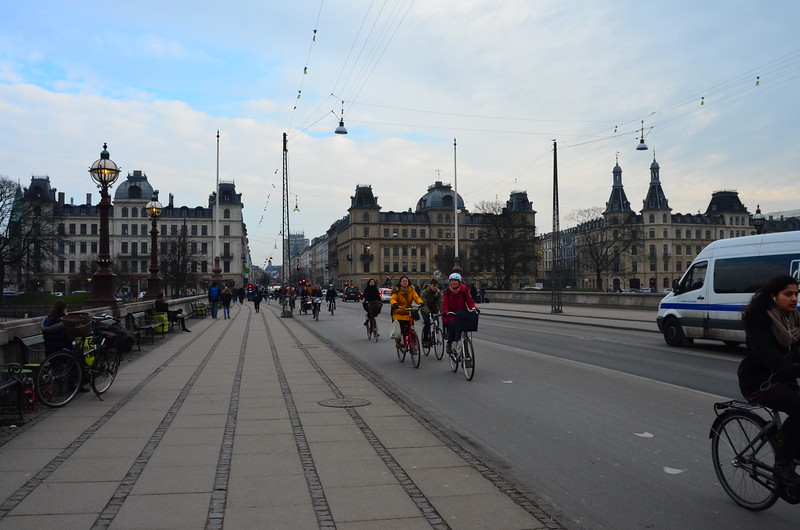 These are on some of the major roads in Copenhagen. For some reason my camera didn’t capture the numbers, but they count how many bikes have passed in the last hour, day and year. And the numbers were beyond impressive. Close to 10,000 so far for the day, and almost a million for the year, and it’s only the end of February. I can only imagine what the summer totals must look like!

I took a picture of this because it looked important. I’m still not sure what it is.

This is the old town, somewhere near Skindergade, the college nightlife area. We had some time before any jazz clubs opened so we stopped in the first bar we could find, LA og København. There was something ironic about going to an ostensibly American place in Denmark, but the bartender was unmistakably Danish, and glad to help us discover the sørdansk way. He made it very clear that Danes are one drunken, party-loving people! I don’t think I’ve ever seen a place before where 10 shots and two tankards of beer is a common, acceptable drink order, and the nightly special happened to be Fisch (a searingly strong peppermint schnapps), and his personal special, a mango-based tequila shot which was much more delicious.

Sorry about the blurry shot here, but… how about this for an example of foreign branding? What says romantic spa treatment like coming face to face with the salty slimy lips of a giant halibut?! I would say something was lost in translation, but the German and Danish words are so close (and so many Danes know English) that it could be nothing but intentional!

And from there we caught the early show at Charlie Scott’s Jazz Club. Like everything else in this city, nothing short of amazing. The musicians, (and this just their house band) played 30s-style jazz at the level of almost anything at the Rochester jazz fest! We tried one more taste of sørdansk here – gammel Dansk (literally, Old Danish), a liqueur that tasted like everything wrong with Jägermeister. It was bad. It was awful. But it is uniquely Danish, and we had beer (Tuborg Øl) to wash it down, and awesome jazz to distract us from the aftertaste!

Then, all too soon, it was time to head for the airport and fly to London… and I missed this place already. Someday I’ll be back to Copenhagen!