And right from the start, London meant business. If business means separating tourists (and locals, I’m sure) from their money as expediently as possible. Just to leave the airport (Luton, since we took a cheap flight) cost £52 for a train to our hostel in Tulse Hill. And despite that, we had to wonder the whole time if we were on the wrong train, there was almost no directional signage anywhere to be found, and even the locals didn’t seem to know where exactly Tulse Hill was, or if this train was in fact going there.

When the train finally assured us that we’d arrived at Tulse Hill, it was obvious we had found the Londoners’ London. It’s not the kind of a place a tourist would wander into – not too distant, or scary, just off the beaten path enough to probably blend in with a hundred other stations and neighborhoods just like it.

Whereas our hostel in Copenhagen was quiet, almost to a fault, we could hear this one from the train station door! (Not surprising, since it’s only across the street, but still…) In the reviews, people said the place was loud, and it was impossible to sleep, but even trying to check in at a reception desk surrounded by a pounding reggae dance floor was close to impossible. Once we at least paid, the manager Bekki showed us to our room. Which, contrary to our reading of the listing on Hostelworld, contained just one bed. Oops…

We had never heard of it, but it was something we would hear quite a bit more from, traveling through London together as a Bill and Ben. And even after downing a few shots of duty-free scotch and trying to ironically comprehend an episode of it, the show still defies all logic. Unless England has some kind of psychoactive flowers they’re holding back from the rest of us?

Once that was sorted out, and I was relegated to the dorms, we went down to the pub for some hideously expensive pints. (Which turned out to be relatively cheap for London, £8 for a beer isn’t unusual!), and after the pub closed, stayed around to party with the bartenders and other hostel guests. We had no difficulty reaching the bottom of the bottle of scotch, or finding another at the 24-hour liquor store (something much needed in America) to continue the memorable, forgettable night much longer than we should have.

Waking up the next afternoon, we figured we might as well see London’s landmarks, or as many as we could pack into half a day. Thinking it might be cheaper, we tried to board a bus toward Victoria Station instead of the train, being quite scared to buy another train ticket after the £52 soaking from the airport! But the driver wouldn’t let us on without Oysters (and wouldn’t tell us where to get one). The next person we asked knew, we got the Oyster cards, and caught the next bus.

At Victoria, I spent a while arguing on the phone with the people I was supposed to meet up with the next day for some urbex, and for being hopelessly unable to come up with a plan, they canceled the whole thing on me, costing us an hour and leaving us with no plans for Sunday and no good reason to go to Portsmouth anymore.

By the way, these are actually slightly smaller inside than out. And no longer contain phones or time machines. 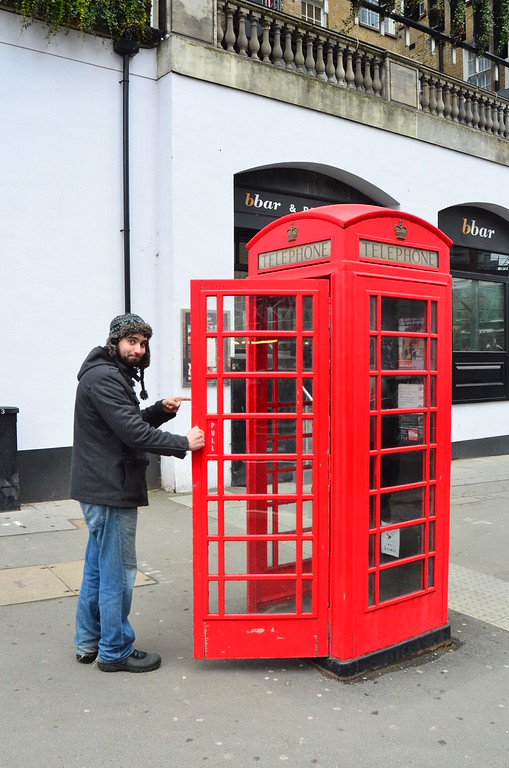 At least we were close to Buckingham Palace and the tourist circuit. 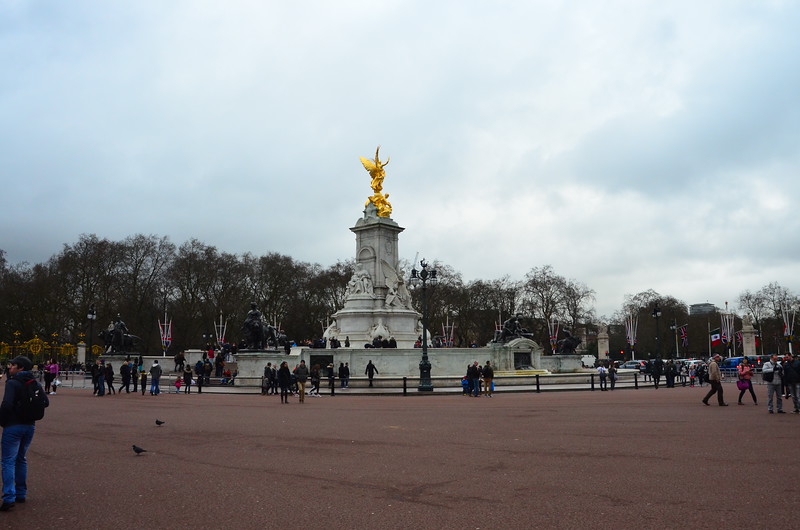 Even if The Queen was absent, and there was just one lone guard, not the usual parading and changing of the guards. (Also, anyone know what happened to the red coats?)

This is not the Marble Arch. We sure took enough pictures of it though thinking it was! 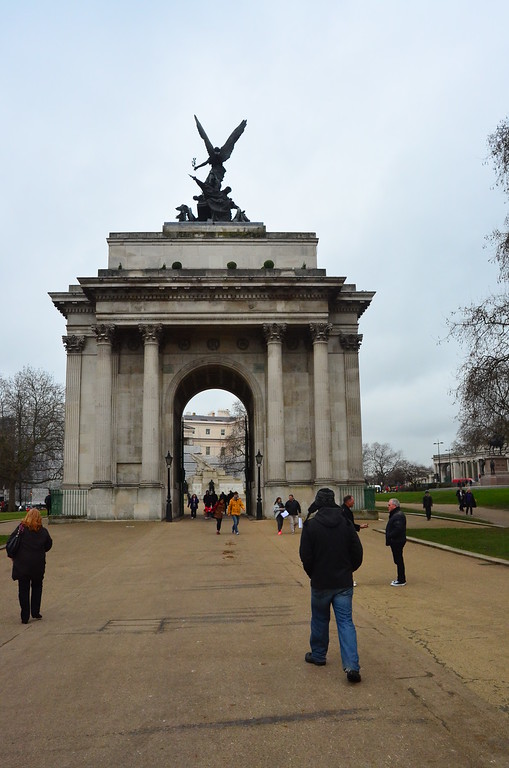 We tried to check out the Speaker’s Corner, where usually something political is going on. For us, though, all we got was a parliament of pigeons. 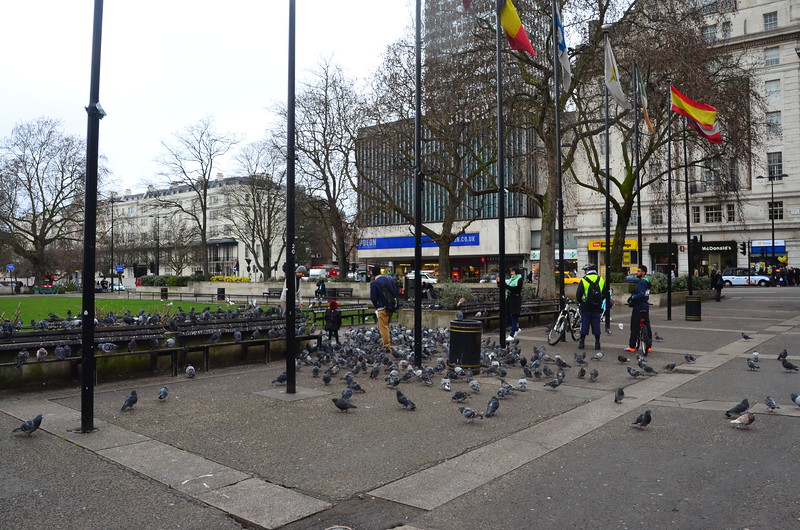 An umbrella store. How British…

Eventually we found the actual Marble Arch. Which is much smaller, less impressive, and mobbed with tourists. 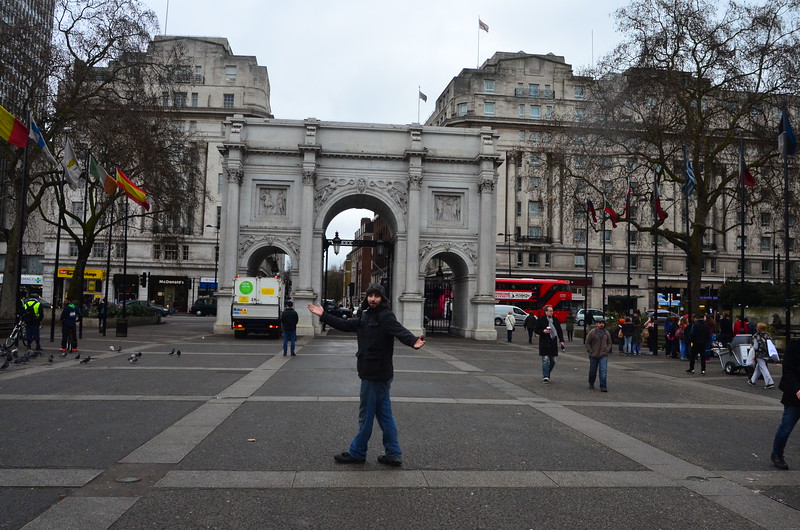 The constant crush of people continued all afternoon, shoving our way through Oxford street to the British Museum. We probably should have just avoided the whole mess, having no interest in Soho or shopping… it could just as easily have been New York but for the cars driving on the wrong side of the street. By the time we reached the Museum, it was nearly closing time.

So we did the one thing that made sense, and ran around there as fast as we could, trying to appreciate with excessive speed as many priceless antiquities and trophies of the Empire as we could before they made us leave.

I think this was something Etruscan. People seemed to think it was very important.

It’s chess, but one side gets all the pieces, and the other side gets 24 pawns

The Rosetta stone was here, but I somehow completely forgot to take a picture of that one. So here’s an Easter Island Moai head instead 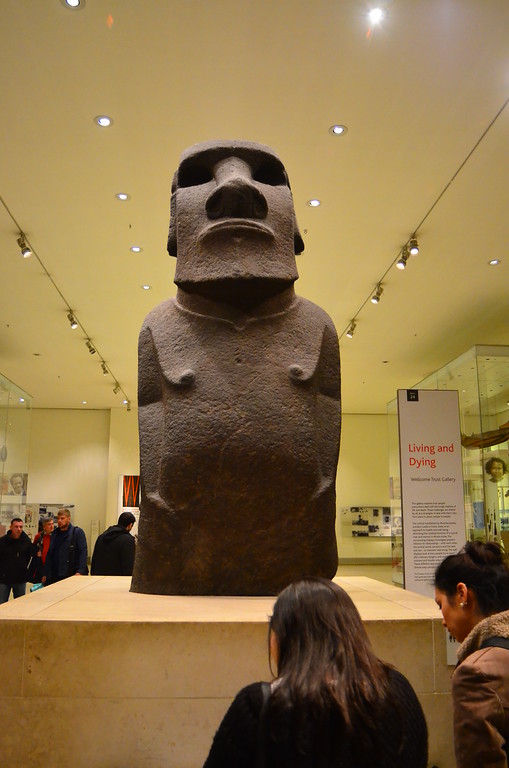 By this time it was already dark and a fine British rain had started to fall (of course). 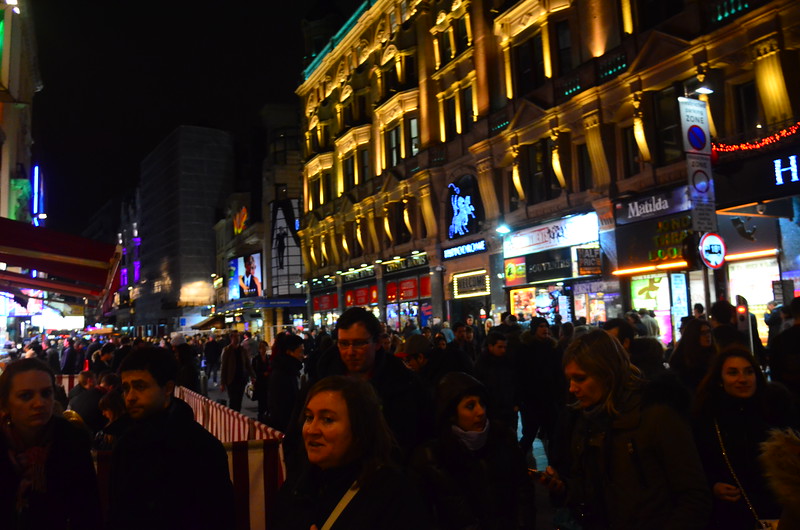 We continued our wandering through the West End, still trying to see Trafalgar Square and Big Ben. We end up sidetracked at a casino, and try to take some of the bite off of London’s expense by dropping £50 on the blackjack table and winning ourselves a nice dinner and a few pints. I think you can guess what would happen to Team Fail.

Once we were done going through the motions of being tourists, and it had started raining enough that we didn’t want to walk around any farther, we tried to get directions for a bus back to Tulse Hill. Asking in a nearby store didn’t help, so we just got on the first bus that seemed like it was headed the right way, and it got us close enough. On the ride there, a helpful old man told us just how overrated and even MORE expensive Paris and Amsterdam were, and that we should try Berlin and Prague instead.

In Tulse Hill we picked up some frozen curries, a few pints, and another bottle of Scotchy, Scotchy Johnny Walker black label Scotch. Of course we weren’t the only drunks in the pub and hostel. I ended up in a bit of an altercation with a bloke Dennis who claimed he used to play for Millwall FC some years ago… he heard me speaking American, saw my rather substantial girth, and immediately started going off about McDonalds and the NFL and how Americans are just too fat and ugly to handle real football, let alone to have any kind of responsible role in the world. Once I figured out he was pissed beyond reason, I set out to reach the same state as quickly as possible, chugged the beers, and went downstairs for more…

If anything, the pub was even crazier, with a dance floor going (disco never died in Europe) and a louder, rowdier, drunker than average clientele. Once they were all shown out the door, the party raged on in the hostel, and we made it through two more entire bottles of scotch (and an assortment of other stuff) pissing the night away. At some point during all this, I booked our tickets to Berlin on Ryanair, something sober me would probably have known better than to try…

At the end of all that though we did get to experience Tandoori chicken pizza. Which might not have been quite as awe inspiring as smørrebrød, but certainly a delicious end to our second night in London!

Who Ate My Train?