It started out of spite… a few days after New Year’s, I bought a ticket to Copenhagen, for the end of February. I had just had a bitter argument with my parents about the possibility of going hiking in Iceland this summer, and they even offered to use their leftover airline points to get me there… until I was forced to admit I had no idea who was coming with me yet, even though the trip was at least six months away. So I decided to go farther, and sooner, and just kind of hoped that if I waved tickets to Europe in front of enough faces, someone would bite.

I should have seen it from the start, that there would be a lot of failing going on. It was a total scramble finding anyone to go to Europe with me, even after I bought tickets for a few friends who found various reasons they couldn’t go. Five days before the flight, I was at Mendon Ponds flailing around on Nordic skis with Ben and his dad, and the idea came up. Monday night, it became official, he had the tickets, we were going. Tuesday night, we tried a desperate bit of research, which mostly consisted of finding the first hostel we could in the cities we thought we were going to, and watching a few episodes of Anthony Bourdain. Wednesday afternoon, we were in the airport, as ready as we could be for it all to start.

It didn’t take long for the gremlins to appear. Pouring over $9 beers in the airport bar, our flight to New York got delayed again … and again. Then just as it looked impossible to make our connecting flight, a ticket agent stopped by the bar and let us know there was a plane ready, and about to leave NOW!. We got to JFK with plenty of time to spare, but they wouldn’t let anyone off the plane. We had missed the gate by 9 feet, and a tow truck would have to be called in to move the plane in line with the jetway door. During that improbable delay, we decided we could be nothing else but Team Fail, seeing the world propelled by nothing more than curiosity, sheer incompetence and plenty of booze.

Even though we were on the red eye flight to Europe, it was just too exciting to sleep much, so we listened to jazz and played chess and watched a movie about a disgruntled chef who finds himself through a food truck, and eventually the 7-hour flight was over, and we were on the ground in Copenhagen, Denmark! We found the train to the city center, and with only minimal wandering around in circles, our hostel, complete with what we would soon recognize as a typical Danish parking lot: 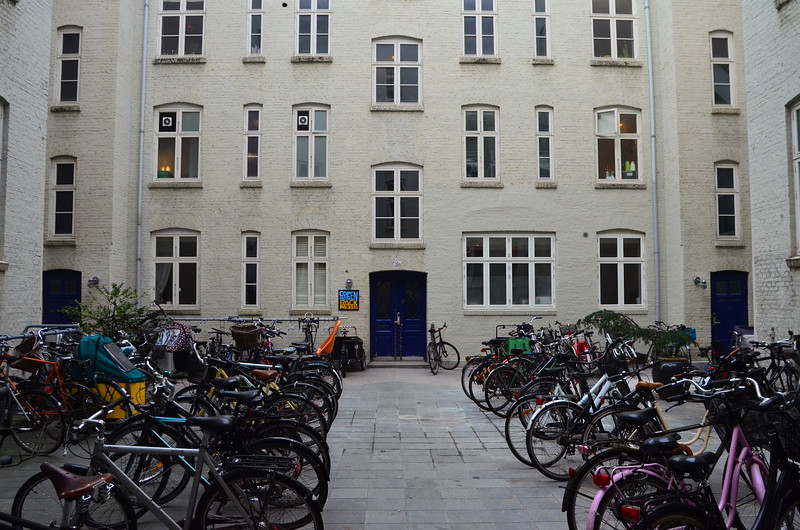 And then came the jet lag.

Maybe it was noon in Denmark, but it was still 5am to us, and we were up all night.

Perhaps because of that, or just because I was 50% of Team Fail, I immediately started failing as soon as I was in Denmark, starting with trying to get my phone working so my parents wouldn’t panic and wonder if I got here in one piece. I tried everything I could think of and then some to make the thing work… then realized it was in airplane mode! Oops. By the time I got that settled, the hostel had cleaned out our room, so we took a nap for a few hours before trying to explore any of Copenhagen.

When we woke up, it was a wet but warm Danish evening. Certainly nothing like the below-zero and constant snowfall Rochester had blessed us with over and over since Thanksgiving. 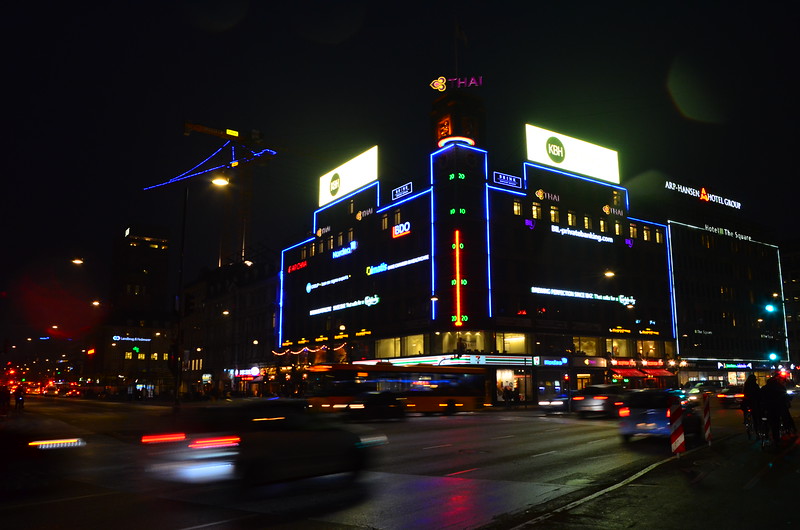 We decided we may as well take our chances and see the more offbeat side of KBH, Freistad Christiania. Perhaps most famous outside Denmark as a lawless drug den, Christiania is a former commune (and still extremely progressive area) built on a former Nazi military base, which is de facto independent of Copenhagen and Danish law. The drugs were certainly there, on the aptly named Pusher-street, near the entrance of the village. It was about what you would expect an open-air drug market to look like: market stalls selling paraphernalia with impunity, and slightly camouflaged (behind tapestries and tiki curtains, with almost cartoonish drug dealers standing around in front of them) market stalls selling actual weed and mushrooms, for (to Americans anyway) bargain prices.

Because of this rather unusual activity, and the fact that this is still illegal in the rest of Denmark, taking photos here is strongly discouraged for obvious reasons, under penalty of… whatever angry Danes do.

A few blocks away from Pusher-street and the green light district, Christiania seemed like more of a bohemian night spot, quiet on a winter weeknight but obviously much more lively on weekends and in the summer. Nemoland (“nowhere land”), closed for the season, is the apparent center of this scene, with a huge outdoor stage and surrounding bars and restaurants. We picked the only one that was open and had live music on a February night, which was a strange mix of 50s modernism and 70s post-hippie aesthetic, and named Operæn (little opera house). I made something of a fool of myself trying to order beers, or, in Danish, Ø, off of the bar’s menu. But eventually we had some of the local microbrew, Christianstads Øl, and then under a haze of green smoke, the music started: traditional acoustic Danish folk music, bringing everyone together – and it couldn’t be a bigger variety of people, from Copenhagen locals to college students to businessmen in suit and tie, and three older Roma women in traditional attire, dancing the ländler.

When the music stopped, we wandered around some more looking for food; the only other places open were a Greenlandic bar that didn’t take too well to outsiders, and a döner kebab stand. The lack of options led us to a great choice though; even if it wasn’t what Anthony Bourdain would have done, there isn’t anywhere in Rochester to get a döner, so it did us quite well at the time.

After we got back to the hostel, we met a Parisian girl waiting for the rest of her group to arrive, and started looking over plans for the next day. She and her friends were interested in old castles and the Little Mermaid statue, so it didn’t seem all that likely we’d stay together for long, but we did venture out again looking for that organic food truck we couldn’t find by the train station when we first got there. Of course we couldn’t find it, but we got to see Tivoli, from the outside anyway, and made a new friend that we might not get to see again.