After a night of hipstering around in Brooklyn and a frustrating subway ride lost in Queens, I caught a bus from the festering pit of humanity on 41st street to Cleveland. I will admit my expectations for Cleveland were essentially zero. Despite having made what I thought were plans with Johnny and his friends, it wouldn’t have surprised me one bit to learn that it was all fake, just meant to send me all the way out to Ohio for nothing.

Only a few minutes after I got to Cleveland, something totally unexpected happened. They showed up! We started in east Cleveland at a place they call the Duck Factory, Woodhull Supply. At first it seemed like an ordinary enough trashed abandoned factory…

And then I started to figure out why it’s the duck factory. Piles and piles of random rubber ducks. 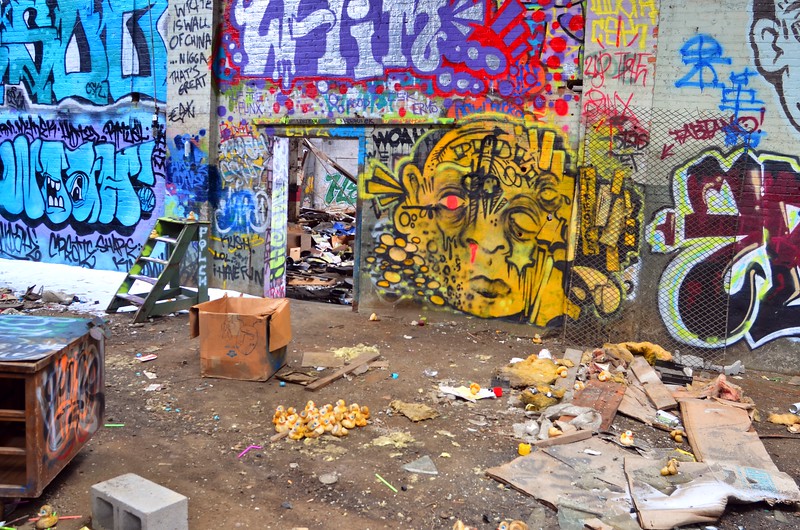 So ducking many. And apparently this was after almost all of them ducked out.

Someone, maybe someones, have video of the whole thing that they’re editing at some point. That would do so much more justice to the Great Duck Battle of 2015 than my photos would.

After the ducks, they led me around in circles for a while so I wouldn’t know where I was, then brought me to the Warner Observatory, which once housed two enormous telescopes until there was too much light pollution in Cleveland to see anything useful.

This dome reminded me of the old Myst games. Only the “Tower Rotation” function and the metallic grinding sound were missing.

THAT takes some skill…

And what’s this? Proof that I’ve actually met other explorers?!