I’ve had my eyes on this building for years now, since I lived downtown. Not for much good reason, except that it was the local abandonment, not counting the one that was just an elevator ride away. But despite being so close, it always stayed locked up and even defied our efforts to Occupy it instead of wasting everyone’s time fighting for a silly park.

This building began as a hotel, the Richford, in around 1920, founded by one Richard Ford, initially without much success despite a central location in the middle of downtown Rochester and between the then two train stations. By 1929, it became much more busy, and profitable, due to the Greyhound bus station appearing next to it, as well as being at the intersection of the three main roads into and out of the city, a situation which caused a proliferation of hotels within a block of the Richford. During the Depression years, these hotels were reduced from at least 12 properties down to three: Sagamore, affiliated with the namesake Adirondack resort and its level of clientele, Richford, which attempted to bring excellence to bus travel, and the unabashedly cheap (even by 1930s standards) Cadillac.

Suburban sprawl, economic pressure and Rich Ford’s 1959 death led to the hotel’s closure in 1961, leaving only the Cadillac still open (which itself served to prevent much of anything else being able to succeed on the block to the present day). Since then, the former Richford Building has been the ruin of one developer after another, starting with an office conversion (and new white painted metal façade) in 1969, which failed to attract any tenants, then a botched bank conversion in 1973 which saw First Federal open and close a branch in the first year. The next three property owners each failed to make any material changes to the building, let alone fill it, before their own respective bankruptcies. Since 2008, it has belonged to local slumlord Matthew Wood and one of his dozens of sham LLCs, and has been in a constant state of arrears, piling up tax, mechanical and other liens, with still no clear plans to move forward.

In this context, it seemed like a productive place to Occupy as a community space and eventually a crowdsourced renovation. While these plans never materialized in 2011, with the current Sanctuary Village crisis, exploring this building carried a bit more than mere curiosity. What was inside? Would it be of any use as a temporary autonomous zone?

Unfortunately, the answer was a resounding NO! The building is a total wreck, possibly scrapped, more probably the result of the series of botched renovations and various upgrades and abatement projects that evaded completion. Complicating the situation, some of the windows have probably been open since the 90s, and pigeons have made the top floor a winter shelter. 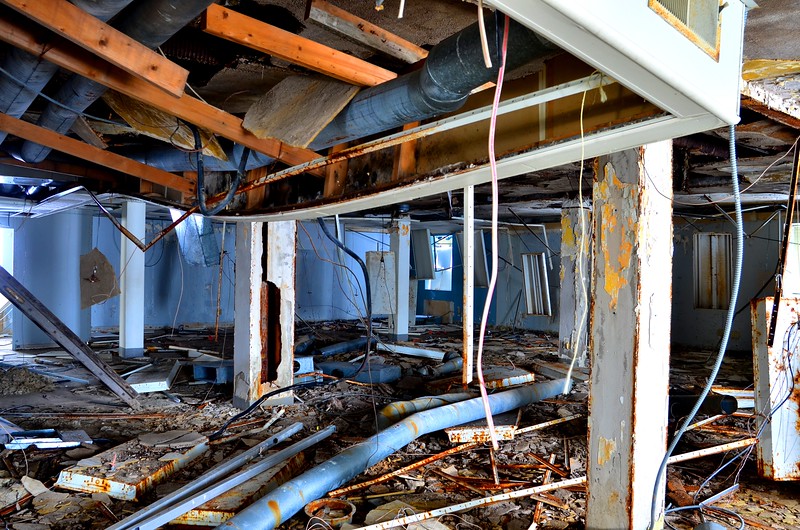 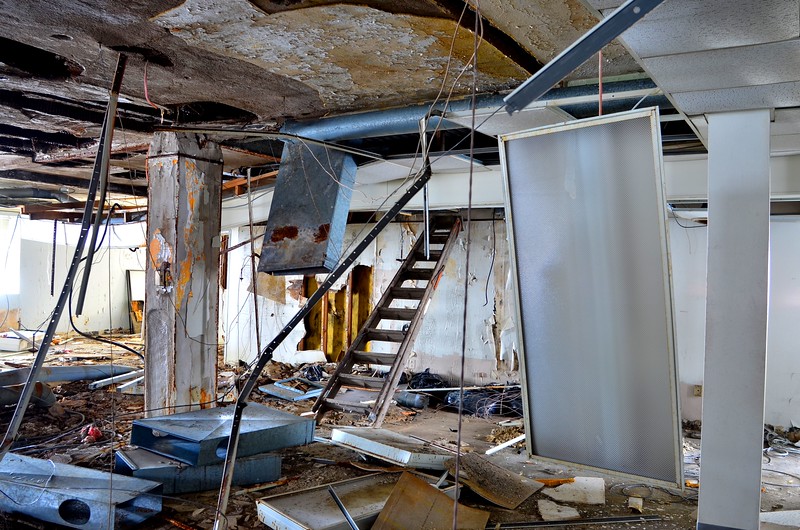 Not even ready for the homeless. A subway tunnel or a tent would be better than this, without a LOT of work. 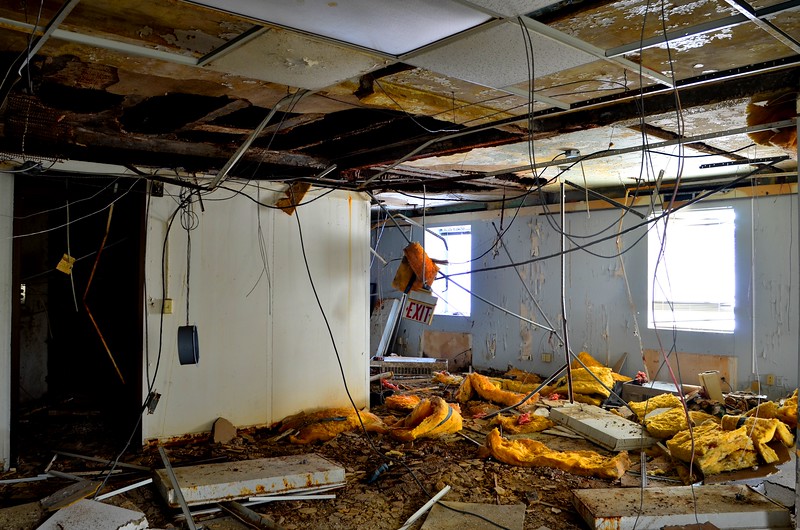 Somehow, the lower floors took even more water damage over the years.

Even though this floor might have actually been used for something at some point.

At least it’s a photogenic shithole. 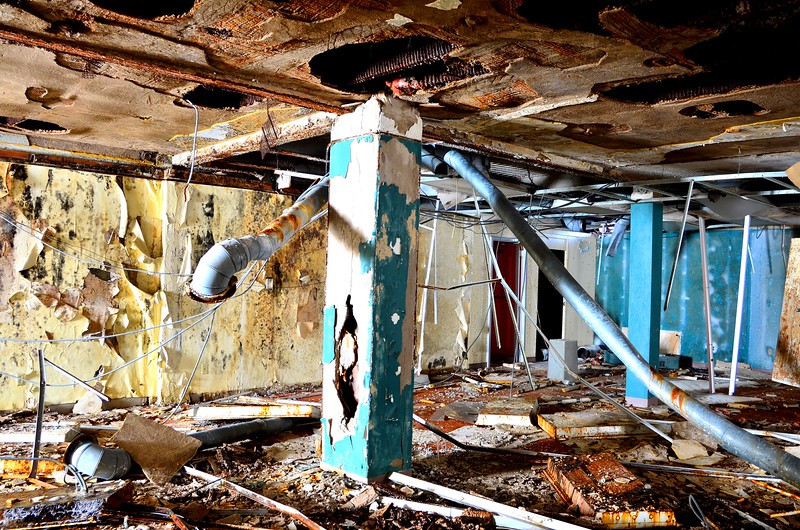 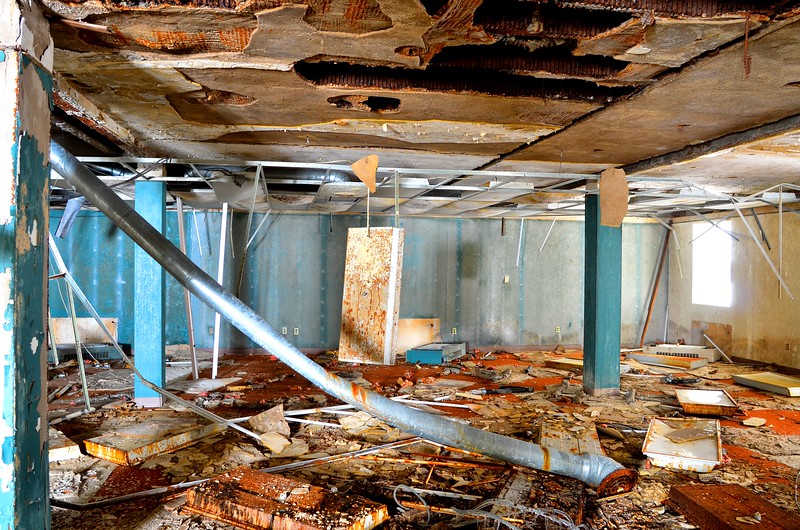 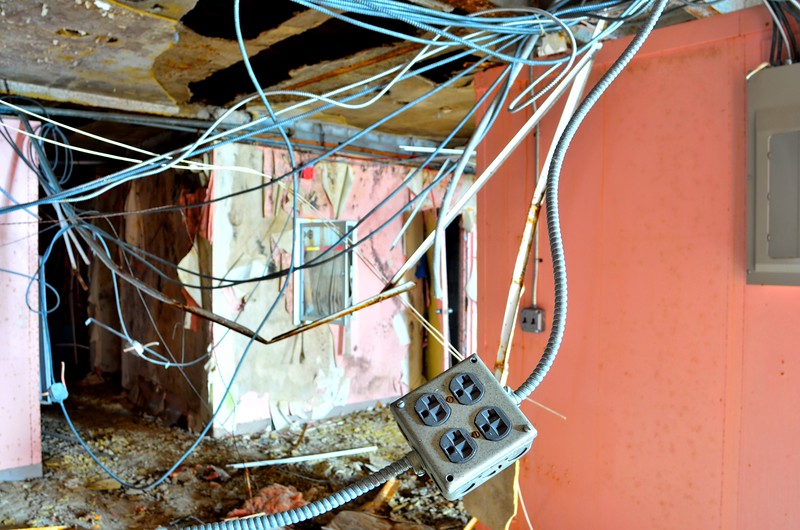 This is the ground floor and presumably last used area, where the First Federal branch was. It’s still not much better than the rest of the place. 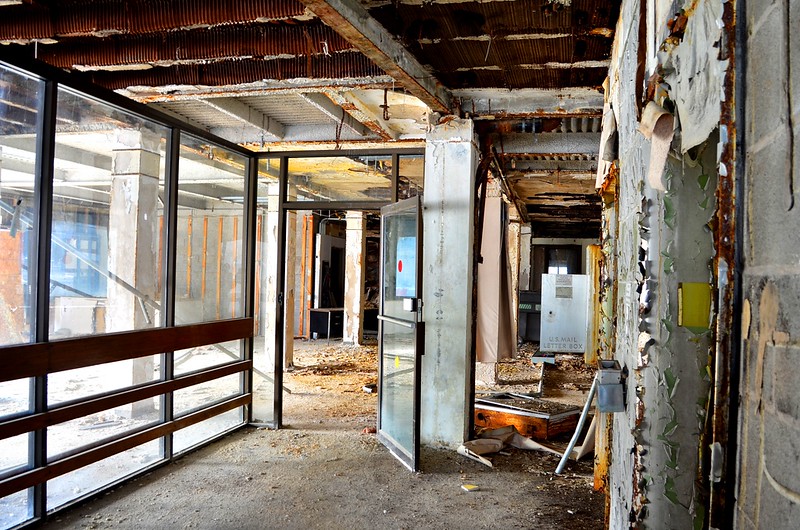 So the verdict was, nothing worth saving. We won’t be setting up a kickstarter to get this one for Sanctuary Village. Turns out there’s a perfectly good reason there’s a 10-story office building on the market for less than the average south side apartment!