It seems like I have the most exploring success when I try the least. Right as I was ready to stop putting any effort into it at least until after Christmas and bonus time, I heard from a TV producer who was thinking of including me in his show. Of course technical difficulties got the better of us for a while, and a video chat and photo slideshow turned into a phone call, but it seemed promising. Then the next day I got a very frightening email saying that they wanted to see a sample of a 10-minute documentary by the end of the week (!) and weren’t in any hurry to answer my questions clarifying it. Having never shot video before, and being at work for almost all of the daylight hours, I knew I was probably screwed. Eventually I found out I got that message in error, and they didn’t actually need me at all anymore.

During that confusion I made a frantic plan to explore the mental hospital again, even though I thought I’d never go back after having one great chance, so I met up with Casey and one of his friends there. This time, Hell’s Hundred Meters got the better of us, as a security guard (who didn’t even work there a few days earlier, and was borrowed from a nearby apartment complex) stopped us and sent us on our way, just as we were about to climb into the wide open window.

We didn’t do much better at the old church on West Main, only this time it was a relentlessly nosy neighbor who circled the property at least six times while we looked for a way in, which there wasn’t one of anyway.

The next day, I made it to the drains at least, showing some people around the tunnels on a frigid December night before we went for garbage plates. There was a suspiciously placed cop at Maplewood, and it just snowed so we would have had to make a lot of noise and/or waste a lot of time trying to make the cover budge. We settled for the “Motivator” drain instead – we really need to go back and see what’s beyond the river of shit sometime. I didn’t bother to take any pictures, but drains don’t really change from one time to the next anyway.

Finally, last night we got out again, and made it into the deep drains. Even after a few times there, it’s still an amazing experience. The thought of being over 100 feet underground and miles from the nearest exit is one thing, but then there’s the tremendous echo (almost a minute in some parts of the tunnel), the pitch blackness, and the sound of being in the city’s vena cava, a slow and steady flow of a buried river, directly below the Genesee.

The scale of this place is such that I doubt any explorers have even been to the end. Just on the most direct main route, there are about 11 miles of tunnel, from the airport to Durand-Eastman park. Most of the distance, however, is in a network of branches that cover downtown and the entire west side, and being less prone to overflow, have gathered deep, putrid mud. Making matters worse, there is only one entrance and exit to the system, most of the ways out consisting of one of these: a dead end with no way up, and a sheer, dripping 100 foot rise up to ground level. 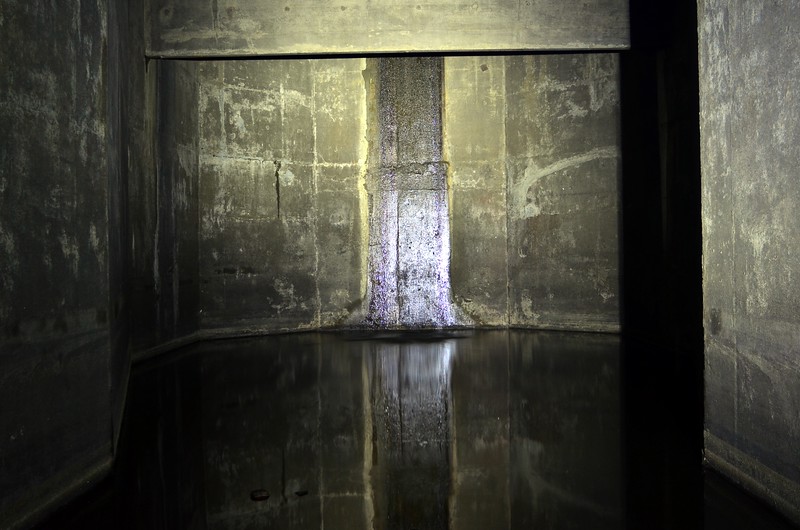 It’s just the ending I want for a year like 2014 though. Far from the dismal failure I expected, I made it to 50 locations, and even made a few exploring friends, admittedly not as many as I lost, but such is the life of the hopelessly inept.