Location: Main St
Been There: October 2013
Built/Abandoned: 18xx-2004
Difficulty: 2/5: slightly, but not much, harder than the front door
Synopsis: Another Catholic church that has been closed for a while… this one is right next to the Anchor Bar on route 5

Location: Lee St
Been There: June 2016
Built/Abandoned: 1912-1990s
Difficulty: 1½/5: requires walking through large hole in fence.
Synopsis: The last remaining building of what was once a huge and toxic industrial empire, Schollkopf’s dye company produced the blue in blue jeans for most of the 20th century.

Location: Buffalo River, near Tifft St
Been There: April 2011
Built/Abandoned: 1920s-80s
Difficulty: 2/5: The only difficulty here is the hike in from the nature center, which adds about 15 minutes to the trip for Cargills, and another 6 or so to Concrete Central.
Synopsis: Two enormous, abandoned grain elevators. Buffalo was at one time the largest shipping port for grain, since it arrived off of the Great Lakes from Minnesota, and was processed and stored here to be sent out on the railroads. The lower level seen above is easily accessible. Getting to the top requires climbing about 15 flights of ‘scare stairs’ and is not technically difficult, but certainly acrophobic. Unless you’re trying to run up the score and explore as many places as possible, Cargill-s is quite sufficient without the extra walk to Concrete.

Location: Bailey Ave/Route 62
Been There: June 2016
Built/Abandoned: 1949-1966
Difficulty: 1½/5: requires walking through large hole in fence.
Synopsis: Wildroot Cream Oil was the hair product that put the grease on “Grease”. Once fashion moved toward more sensible hairstyles, slathering oil all over your hair became a thing of the past, and so did Wildroot. Sales dropped over 99%, and while Wildroot surprisingly lives on to this day, the factory has been closed for 50 years. 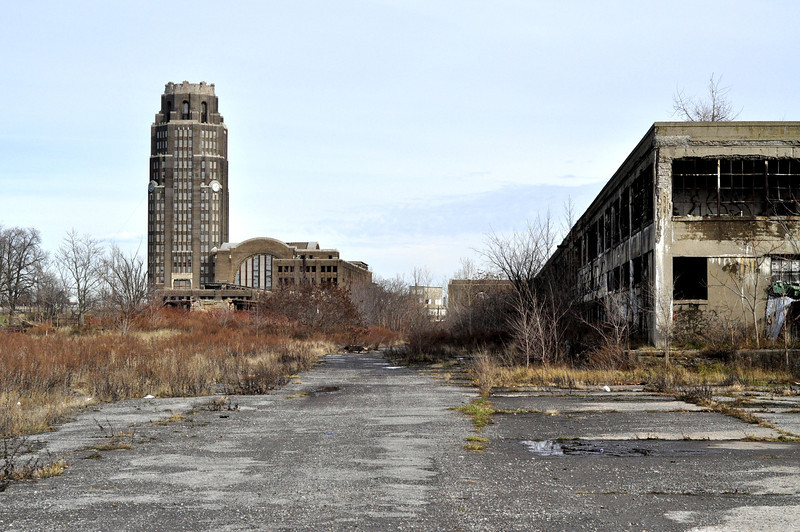 Location: Paderewski Drive
Been There: August 2014
Built/Abandoned: 1930-1975
Difficulty: 1*/5: Most of the property is wide open and little to no police presence. The tower is under renovation, and can only be accessed by tour.
Synopsis: A sad reminder of the end of the age of rail, Buffalo Central Terminal was once the third largest, and at times even the busiest, train station in the US, serving as a gateway to the Midwest and major transfer point for eastbound traffic from Cleveland and Chicago. With the decline of the neighborhood around it, and parsimonious support from Amtrak, this station shut down and was replaced by a trailer near the Sabres arena, which still serves as Buffalo’s excuse for a train station.

Location: South Park Ave
Been There: June 2016
Built/Abandoned: 19xx-1980
Difficulty: 2/5: No security, but boarder-uppers occasionally visit and change the entrances
Synopsis: Appearing similar to a mini-grain elevator, this was actually a malthouse to ferment grain into beering malt. Unlike the elevators, this one can be climbed to the top, and contains more workings than just silos over and over again.

Location: Northland Ave
Been There: June 2016
Built/Abandoned: 1912-19??
Difficulty: 1½/5: requires walking through large hole in fence.
Synopsis: An aircraft factory started by Glenn Hammond Curtiss, pioneer of aviation. Curtiss developed most of the first generation of commercial and military planes, but slowly became irrelevant in the jet age, failing to innovate beyond increasingly elaborate propeller craft.

Location: Emslie St
Been There: June 2016 (failed), April 2016
Built/Abandoned: 1931-2008
Difficulty: 2½/5: All depends if the door is unlocked when you go.
Synopsis: One of a few abandoned schools in Buffalo, school 75 is the largest, and the only middle school, of the 2008 closures. As is often seen with schools, almost everything was left inside, much as it was on the last day of classes.

Location: Northland Ave
Been There: June 2016
Difficulty: 2/5: another one with boarder-uppers and changing, but large, entrances
Synopsis: A rail car factory, from everything I can see. Large and gutted, but quite aesthetic.

Location: Cheektowaga Town Hall to Forest Lawn Cemetery, 4.9 miles
Been There: June 2016
Built: 1937
Difficulty: 1/5 walk in. However, the tunnel is very long, make sure you bring enough beer if you plan on going the distance.
Synopsis: A buried river, covered over to build parks, neighborhoods and the 198 freeway. As far as drains go, it’s enormous, and some of the side tunnels are even walking height and above. Unlike sewers and some drains, the water is clean and flowing, and even contains medium-sized fish.

Location: New Jersey Ave (off route 61)
Been There: July 2016
Built/Abandoned: 1902-1998
Difficulty: 0½/5: you can literally drive in. The best parking spot is IN THE BUILDING.
Synopsis: Designed with the assistance of Nikola Tesla, this factory made use of the abundant DC electricity generated by the power dams behind Niagara Falls. Its main attraction is the hall of machines, tremendous rusting wrecks that no one has bothered to move, and probably have no future purpose.

Location: Perrysburg
Been There: April 2009 (failed)
Built/Abandoned: 19xx-1994
Difficulty: 4/5: actively patrolled by state troopers. Relatively new, very solid fence.
Synopsis: Originally a tuberculosis sanitarium, repurposed into a home for mentally disabled children shortly before closing. While there are some redeeming qualities, and one spectacular shot of the Oculus, it generally does not offer reward proportional to the risk of trying.