It didn’t take me long to get started with 2015. While the TV appearance ended up being a disastrous failure, with Seph Lawless getting the spot I’d been aiming for, and the producer letting me know that he followed up with me by mistake after our interview, I had a few leads to follow and the potential for some huge adventures in the not too distant future. And especially in the winter, I get a horrible chronic case of wanderlust, and make lots of impulsive plans – this time, to spend a weekend in New York City and Cleveland to finally meet a few people I’d been hoping to for months by now. I spent Friday night getting traditionally hammered at my work’s belated Christmas party, furiously planning a trip to Europe, and finally catching the Chinatown bus to New York City on an exceptionally frigid night.

After a little mishap in the train station (The ticket machines are WHERE?!) and breakfast at a Greek diner, we caught the next train to Kings Park, and got into the asylum easily enough, once I remembered where the entrance was (which only took walking the entire way around the building). We headed straight for the roof, and followed a grating mechanical noise to its source: a wheel on an air duct of some type that has been spinning in the wind ever since the place shut down. 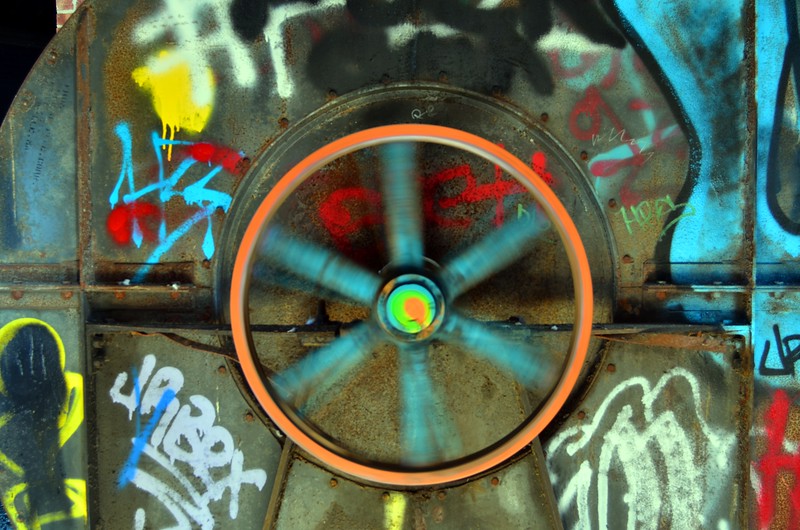 It was a beautiful day on Long Island. A bit too cold for sleeping under the stars on this roof this time though. 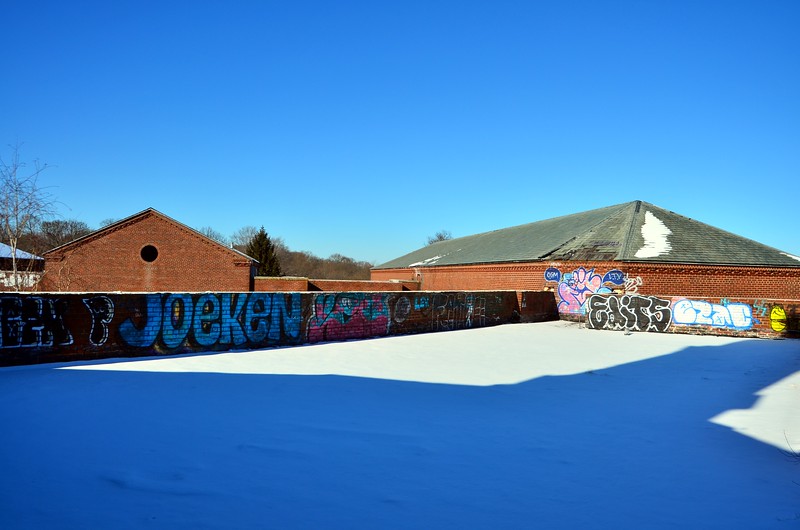 The asylum is exceptionally trashed, but that just comes with the easy access, and it’s still got enough natural decay and colorful graffiti to be worth the trip. 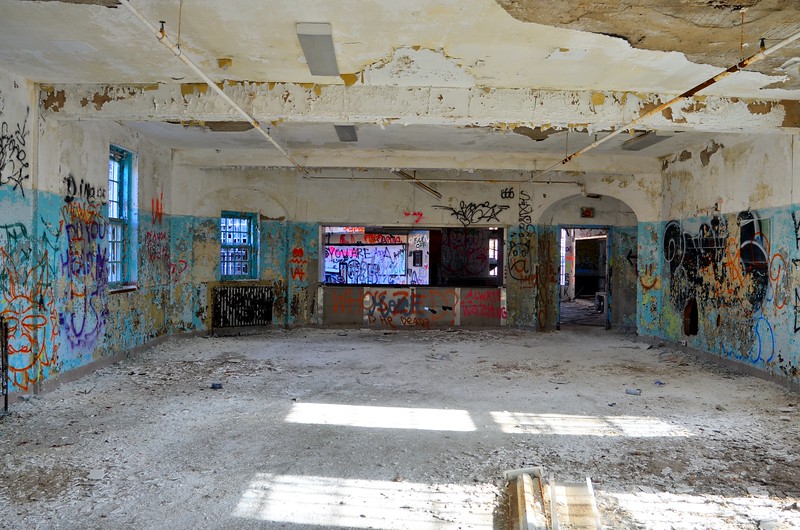 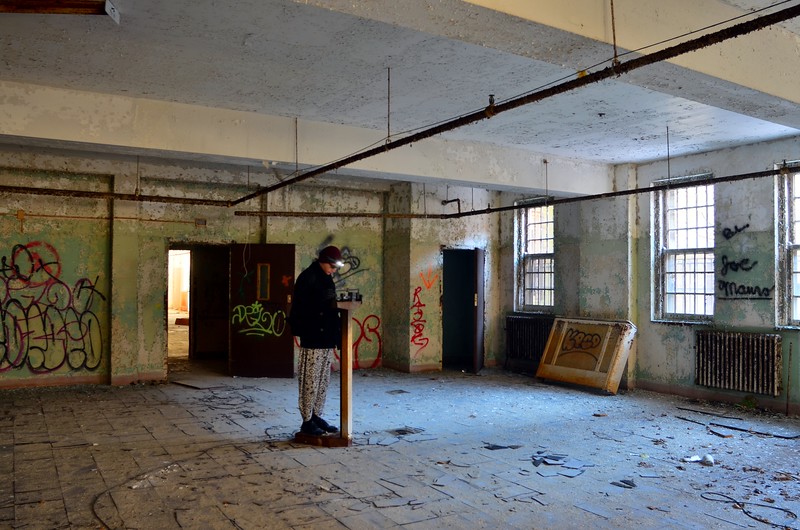 After a while in that building, I led us into the tunnels, hoping to get to the main tower without the risk of getting caught out on the grounds, especially with the relatively fresh snow available for tracks. We got thoroughly lost, and tried a few crawly passageways, but every path was either a dead end, a circle, or led to the power plant. So we explored the power plant instead, which appears to be Eric’s natural environment. 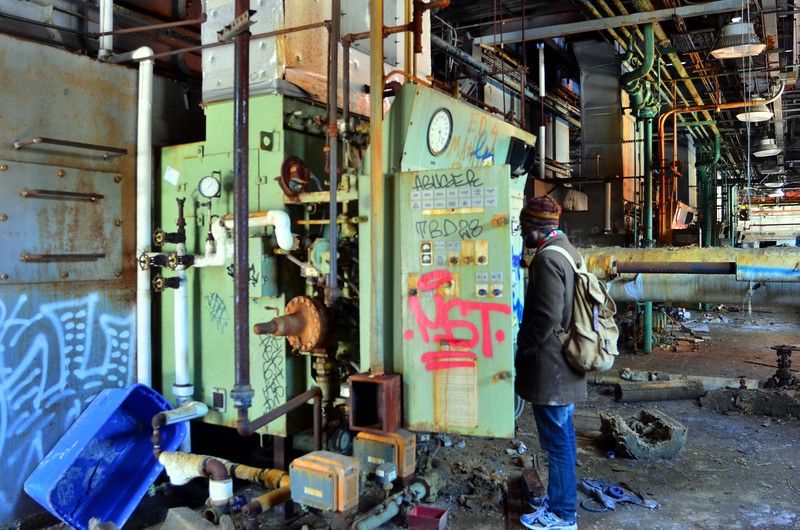 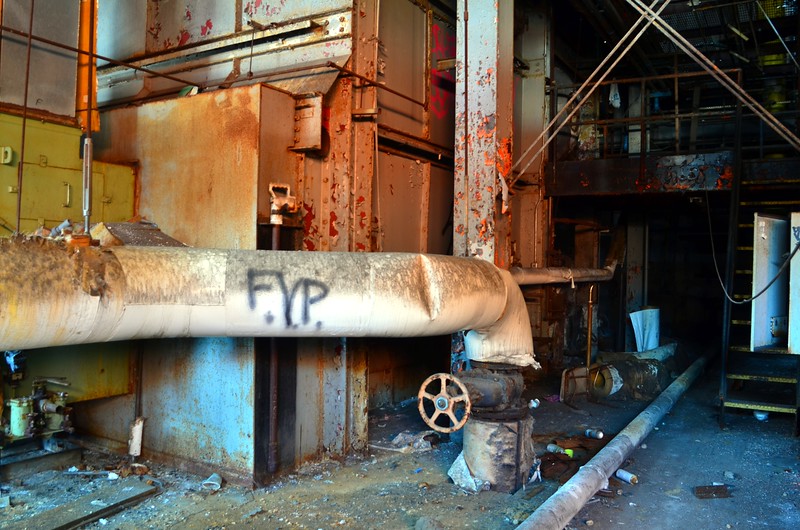 Someone went “Office Space” on the office. The graffiti has a bit of local flavor too – Downer has gotten to just about every building in Rochester too

The main machine room is still my favorite part though. It’s my first power plant, and probably my last one, considering how secure most of the abandoned ones are around here.

We tried for much longer than it ever should have taken to find a reasonable way out of this building, without making too much noise breaking and exiting, or having to make a preposterous climb out. It wasn’t about to happen, so then we tried the tunnels, got lost all over again, and finally just left the way we came, and took the most direct path we could to the tower.

There was a new fence, and some new boarding up, in the year and a half since I’d been. I still gave it a try, and was on the wrong side of the fence when the park police showed up. It was obvious what we were doing, and we had cameras and tripods and a lot of stuff that wasn’t crowbars and spray paint, so we talked our way out of it easily enough, but we managed to be the lucky winners of “Let’s Get Caught At Kings Park!” for the day. We got scared and we got out, didn’t even try any other buildings after that, and went back to Brooklyn earlier than planned… until next time, I guess.