Deferiet is everything you might expect a company town to be, when the company leaves. From the potholed entrance road off the highway, to the complete lack of businesses on the village’s three streets (which wrap around one side of the mill), this is clearly no boom town. Even the bank, the post office and the fire department closed, all of them maintained by the Champion Paper Company of St Regis, just like the enormous industrial hulk that is still the focal point of Deferiet, even in its inglorious death.

The houses aren’t all empty, at least — the town borders Fort Drum, and is only 8 miles from Watertown, so especially with the undoubtedly plunging real estate prices, enough people still live here. But they only live here, with no jobs in sight. Most of the people left probably don’t even remember the mill, even though it only closed 9 years ago: those of working age would have moved to another mill town or left the paper business entirely. Even fewer care about the mill. The gates are wide open, no one is watching. The last action on the property was in the fall of 2010, when the Army tested some demolition explosives on the main building, leaving a crater of shattered brick and twisted melted re-bar. The result is too broken to salvage, and too solid, not to mention isolated, to ever be worth demolishing.

Like everywhere we’ve found in the north country, getting in was beyond obvious: follow the gaping hole, this time larger than a football field, directly into the factory, taking a short detour through the firehouse. 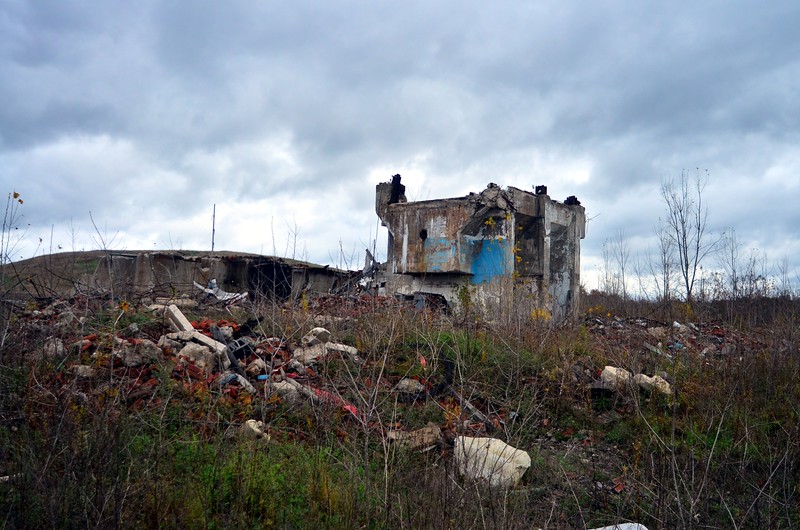 Like most places in the chemical business, laboratories were all over, at least one in every building, with most of the toxic fun stuff still intact (and the rest spilled, shattered and fuming the place up)

At the edge of the “demolished” section, you can start to imagine the sheer power of what broke half the massive factory apart

Looking the other way, you can see just how much is still left, AFTER half of it met the bomb!

Compared to Lyons Falls, it’s nowhere near as photogenic, being of more recent renovation. Lyons Falls was built in 1918-38; Champion has had a mill on this site since before 1900, but most of the surviving buildings date from just after World War II. 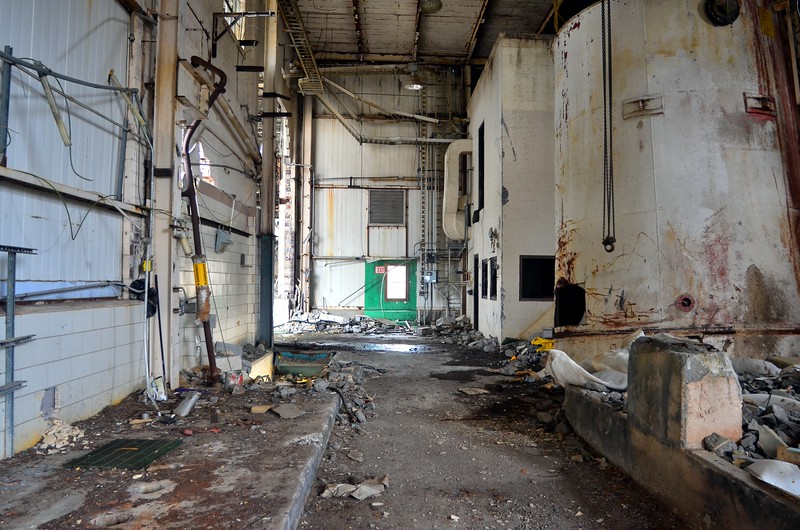 The last paper left the mill in January 2005, giving it plenty of time to reach the information age. The control panels of Lyons Falls were long since replaced by electronic terminals like this on many of the columns, each controlling one or two processes.

Most of the machines, presumably of tremendous scale, were salvaged when the mill closed, leaving gaping holes into the basement and sometimes even sub-basement 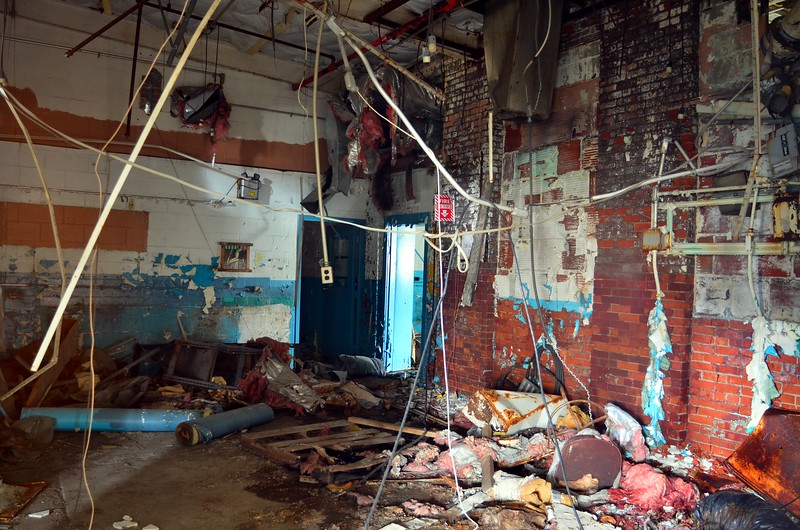 Adding to the carnage the Army inflicted on these ruins, winter (maybe aided by a blast wave) took down a few sections too. 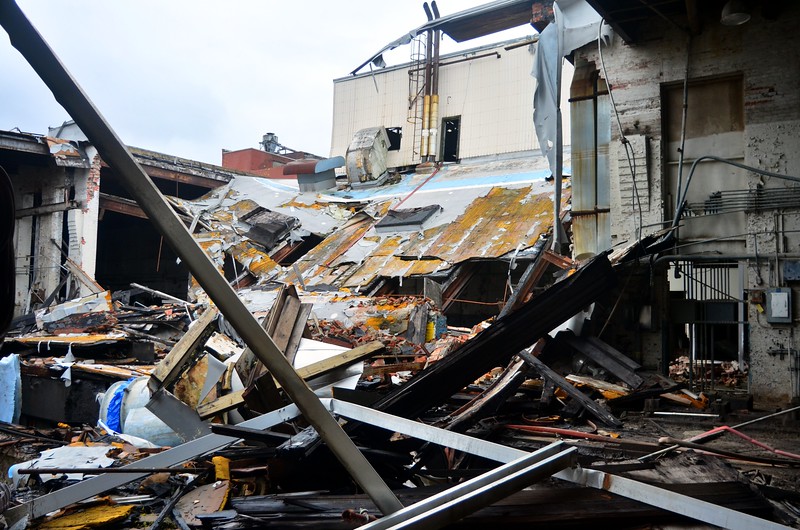 These confuse me. Not just here either – Bensons Mines and Sykes have them too. Electrical outlets hanging from conduit, 4 feet above floor level, and not on a wall. Any idea what these might have been for? 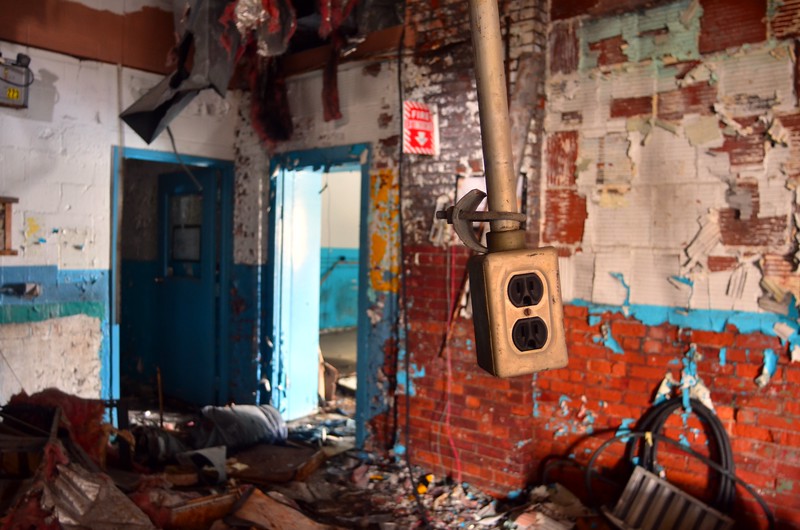 I think this is my favorite sign I’ve found in an abandonment. If it were a little bit smaller and not nailed to the wall I’d have to admit it would be on my office wall. 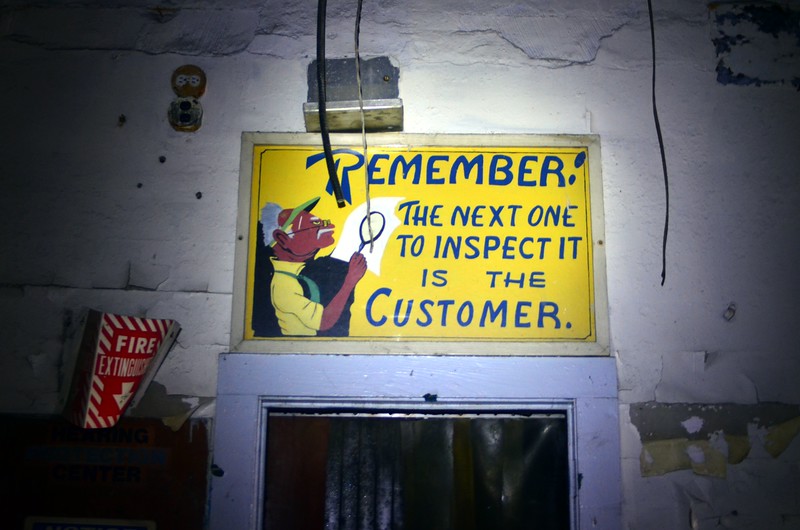 This was just about the only graffiti in this place. Or in the whole north country for that matter.

After the mill, we went through the office, one of the more interesting parts in 2011 but now hopelessly water damaged with mushy floors and moldy just about everything inside… The hallway was the only worthwhile shot in the place, and we had better things to get to anyway after Deferiet.