Out of all the buildings I’ve explored so far, this one might win the prize for most varied history. Starting as a textile mill in the 19th century, G.C. Charles and Co., no single industry has been able to prosper here for more than 20 or 30 years at a time. Facing economic woes, G.C. Charles left their mill behind in 1913, eventually selling the distressed property to the US Government for production of submachine guns. Savage Arms, a local gun manufacturer, took over in 1920, using the entire complex and building more additions, at the time becoming the third-largest arms manufacturer in America, behind Colt and Remington (each based in a massive factory in Connecticut), producing well over a million arms every year for the American and European market. After World War II, however, demand for guns dropped sharply for both civilian and military use, with the glut of surplus guns on the market, and Savage relocated to a smaller plant in the Berkshires.

In 1951, the factory found a new use as the headquarters of Sperry-UNIVAC, makers of one of the first viable business computers (this in the era when vacuum-tube-based electronics were still relevant, and a computer would occupy multiple rooms). By 1975, seven of the 10 largest technology and computing companies in the US were headquartered in upstate New York: IBM (Binghamton), Xerox (Rochester), UNIVAC (Utica), Sykes Datatronics (Rochester), NCR (Ithaca/Seneca Falls) and Coleco (Amsterdam). Unfortunately for the region, just a few years later California and Japan caught up, and as the computer industry left, so did the remains of the Sperry corporation, whose UNIVAC was hopelessly out of date, and VAX-32 well on its way out.

By 1985, optimistic real estate developers, bolstered by state funding intended to stop upstate blight, began repurposing the complex as an outlet mall, creating stores, artists’ studios and restaurants out of the former factory. Partially due to location, these businesses struggled, and their fortunes continued to decline with modern, car-friendly outlet malls opening in Waterloo and Watertown, and the retail phase sputtered to a halt through the late 90s. The developers desperately tried to hold on, attracting any and all businesses that would relocate into the increasingly decrepit building, with the last ones, a screen printing shop and a chiropractic pain clinic, closing in 2008.

Using still more state and county money, demolition started on (only) the Herkimer County portion of the building, an effort given up in futility by 2012, with Utica’s portion still fully intact and awaiting another developer who will probably never come to the rotting factory.

The entrance was, as you might expect for a building missing its other half, obvious and easy: most of the doors are unlocked, and failing that, you can just go in at the county line where the demolition ends. We chose the front door of the pain clinic, and found mostly gutted rooms reeking of rot and festooned with black mold. Not exactly the best start to a place, so we moved on quickly from there…

The mold stopped almost immediately, along with the drop ceilings and flimsy drywall, and we found ourselves in an old, nonspecific factory. 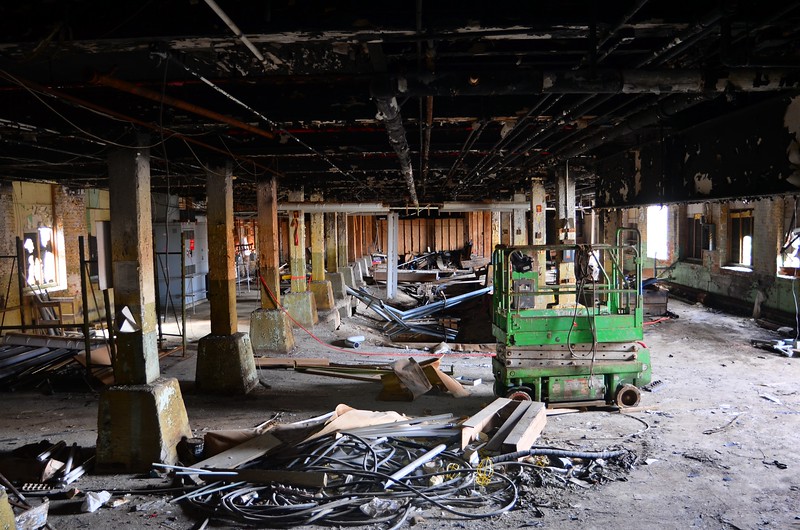 Bits and pieces of just about everything ended up in this basement. There were an exceptional proportion of Christmas decorations, screen printing equipment, and rotting little league sports jerseys.

Upstairs seemed to have changed very little since the textile mill or gun factory days, other than the machinery being removed, and maybe one or two more coats of paint in the last century. Judging by the institutional green, it’s been a while… 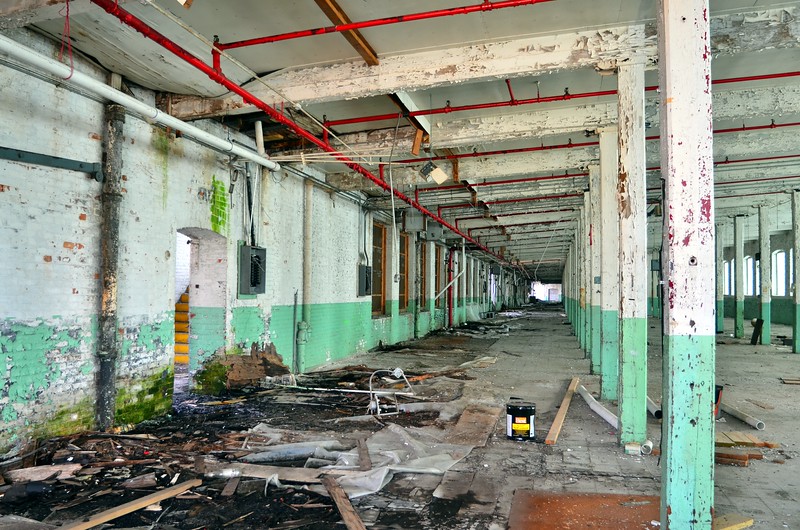 They must have had some leftovers from Adler?

And from Sykes… ever seen a rhomboidal doorway before?

Looking out at the county line, and the missing Herkimer portion of the building… as huge as it is, it used to be almost twice the size! 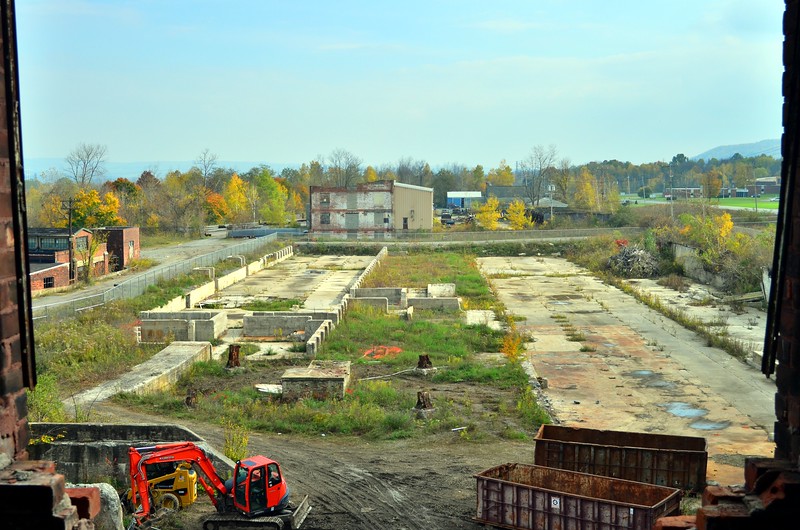 Headed toward the intact part of the building, we wandered into the former mall area. To help those who inevitably get lost in the place, the hallways were designated yellow, orange, and red routes, and decorated as such — the missing part of the building may have had the green and blue sections. Advertising signs like this for stores and restaurants within the same mall appeared at most of the hallway intersections.

There were also outer (service?) corridors, which are more exposed to the elements

This office was one of the last survivors in the building, with Google Analytics reports continuing into 2009.

Someone played paintball in the mall section. It needed a bit of color.

The Yellow Corridor lived up to its name… 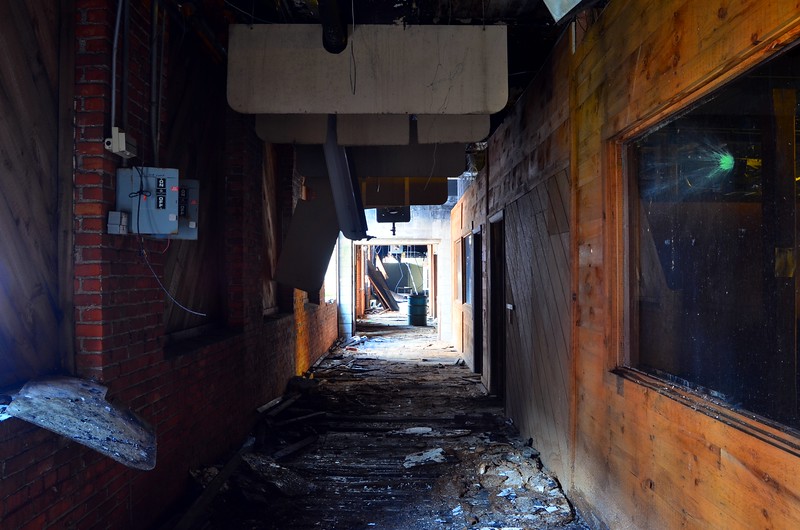 The restaurant looking out over the green swampy miasma appears to have been the aforementioned Charlie’s. We didn’t get to check it out because scrappers were hauling heavy equipment out into a fleet of pickup trucks, and we wanted to keep our distance from that scene.

This space was either a storage unit, a thrift store, or a hoarder’s apartment before this place closed down. Or maybe some combination of these things. 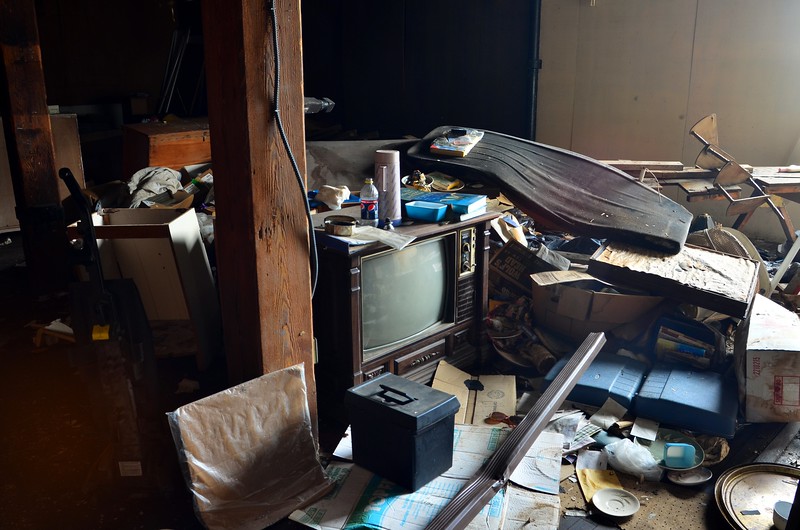 And finally, a discount shoe store dumped its wares. Looks like mostly sneakers and basketball shoes from at least 20 years ago…

I’m sure there was more to see, but we had places to go and more north country wrecks to explore… I’d certainly like to come back here again though!