I’m near the point where this becomes an addiction. It’s finals of my senior year, and the only thing on my mind is getting back to the Catskills. Nate doesn’t even want to wait the week (the misery of entrepreneurship and self employment has some silver lining, it seems), but I finally convince him to wait until after my last exam to go back. So we spent the week planning and plotting, and finding every abandoned resort that might be worth a visit.

The first one we explored, the Tamarack, has a typical story of intrigue and shady dealings for the region; after the decline and fall of the original Borscht Belt, these once-luxury properties went on the market for a pittance, attracting a variety of entrepreneurs from assorted sectors. The Tamarack’s new owners were a purported Mohican Nation, a tribe that only exists in James Fenimore Cooper’s eponymous novel, “The Last of the Mohicans”; their plan, which probably involved an Indian casino and/or tax evasion, landed them in state and federal court on an unwinnable case. The property itself, maintained by a live-in caretaker (oops!) and a landscaping crew, features a ‘Mohican’ cultural museum and annual festival, but the resort proper sits abandoned awaiting new life as a casino.

Unlike Grossingers, Tamarack built on more of a ‘Great Camp’ floor plan, with large mansion-like units instead of a single connected complex. 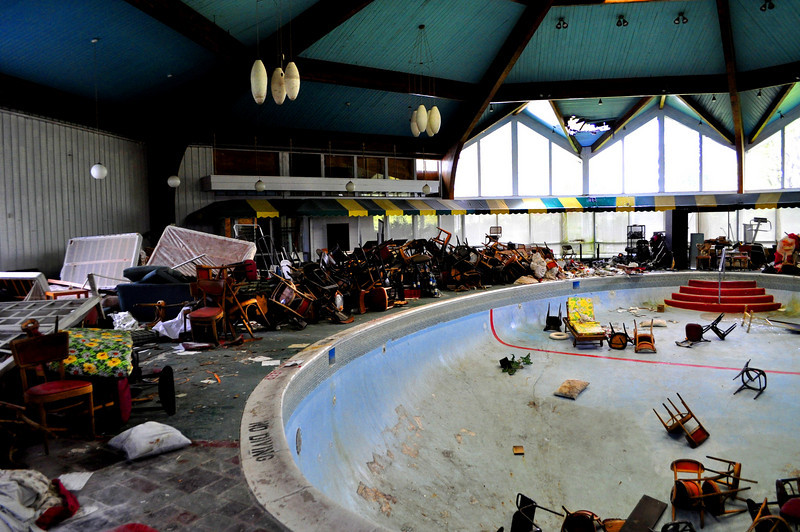 Quite a collection. Too bad these are obsolete now… for some reason abandoned hospitals and hotels did this a lot The caretaker’s bedroom? Or a squatter’s suicide scene? The tableau here is so depressingly creepy… pill bottles, rotting can of food, unmade filthy bed, and law school study guides. This doesn’t tell a warm fuzzy story at all…

Right after this we ran into the guy. He was kind of pissed, and made us leave — at least he didn’t call the cops. You know, he was probably afraid of the cops catching him for that whole ‘Mohican’ business…

See the rest of the set here